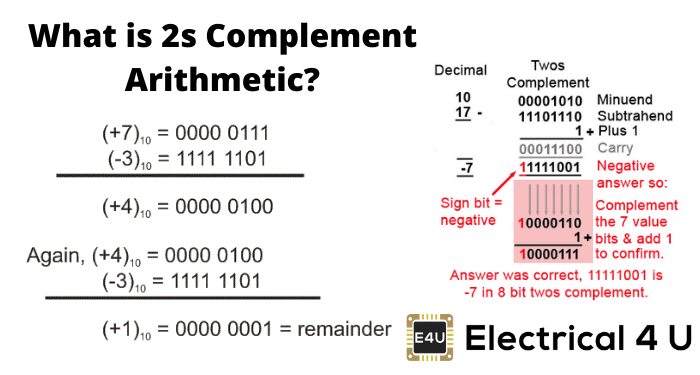 2’s complement has an interesting property that the binary arithmetic operation can be performed easily on signed or unsigned numbers. It yields correct 2’s complement in result.

How to represent decimal number in 2’s complement?

Let us take a number. The negative signed that number is such number sum of which with this number is zero. Take examples of our most familiar number system that is decimal system.
Where,

Hence this result is representation of (- 5)10.

Now look at the chart below. 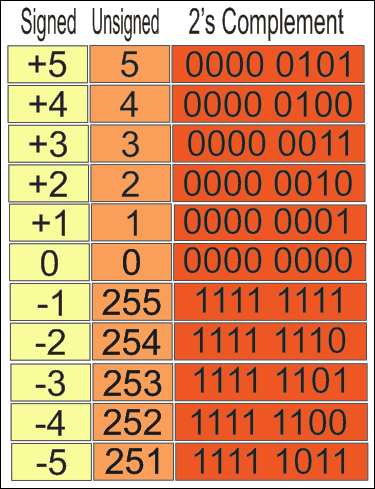 (+5)10 is same as (5)10. But for (-1)10 it is treated as unsigned (255)10. (-5)10 ⇔ (251)10
Always keep it in the mind that negative 2’s complement numbers are always represented as the binary number in such a way that when added to a positive number of the same magnitude must be zero.
The important thing is to be kept in the mind that the left most bit or significant bit indicates the sign of the integer. It is called the signed bit also.

Addition in the 2’s complement, it always follows the same rule as it is used in the normally binary addition. Suppose we want to add (8)10 and (-3)10.
First we have to convert them into 2’s complement and simply add them.

As carry is 1 then number is positive. Here carry is 1 and it is out of 8 bits hence is not considered in byte and hence the answer is one byte long positive number. So it is clear that for signed and unsigned numbers addition can be performed easily in 2’s complement.

Subtraction in 2’s complement follows the same rule as it is in the normally binary addition. Only thing is that here subtrahend is first converted to its negative form and then it is added with minuend. Suppose we want to subtract (8)10 from (9)10. First convert (8)10 from (-9)10 into 2’s complement and simply add.

As carry is 0 then number is negative. So it is clear that subtraction can be performed easily in 2’s complement easily.

As the repetition is in two rounds, then the quotient is (2)10.