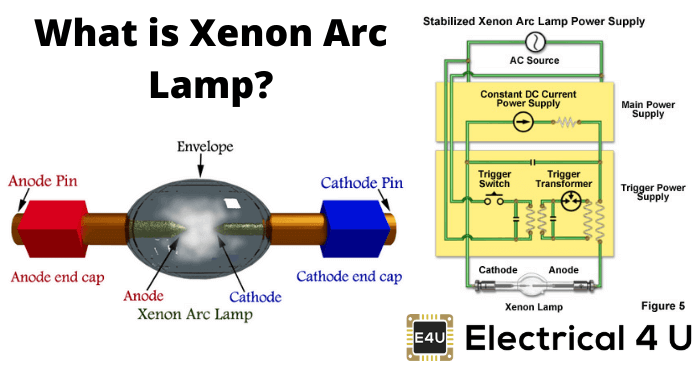 What is a Xenon Lamp?

A xenon arc lamp is a special type of gas discharge lamp. Xenon arc lamps produce light by passing electricity through ionized xenon gas at high pressure. It produces a bright white light that closely mimics natural sunlight, which extends its applications into the film, and daylight simulation industries.

The construction of a xenon arc lamp is very simple. Here, two thoriated tungsten made electrodes are placed face to face with a small gap in an airtight transparent envelope of fused silica.

Thoriated tungsten is the tungsten added with 1 to 2% thorium to give extra strength to the arc by enhancing the electron emission capability of tungsten.

The envelope or bulb is filled with xenon gas in very high pressure. The pressure inside the bulb is about 30 bars.

Here, when voltage is applied across the electrodes, the gas discharge phenomenon starts in the xenon gas in the gap between electrodes. There are always present some free electrons in the gas. Due to the applied electric field across the electrodes, the free electrons get accelerated and collide with xenon atoms. Due to these collisions electrons from the outer orbit of the xenon atoms get detached from their position and come to the higher energy level. Atoms with electrons of higher energy levels are called excited atoms.

When in the excited atoms, the electrons return from its higher energy level to its previous energy state, the extra energy is released as a photon. The wavelength of energy emitted through photons is within visual range. The color of the light of xenon arc light is like daylight. Due to the electrostatic attraction of anode or positive electrodes, the free electrons originated due to the ionization process ultimately comes to the anode and returns to the source.

Due to the attraction of the cathode, the positive ions ultimately collide with the cathode’s front surface and generate positive metal ions, neutral xenon atoms, and free electrons.

These electrons are called secondary emitted electrons. These electrons help to continue the gas discharging process. As the cathode is not additionally heated for electron emission, the cathode of xenon arc lamp or xenon lamp is known as a cold cathode.

Xenon arc lamps are used for: