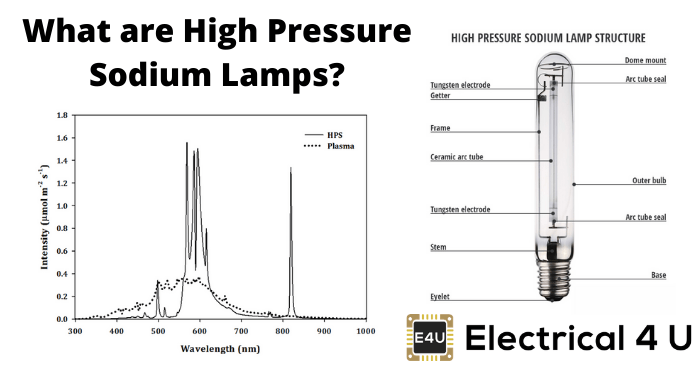 High-pressure sodium lamps (also known as HPS Lamps or HPS lights) are a type of sodium lamp that is widely used in industrial lighting and many public outdoor areas. They are commonly used in public parking lots, roadways, and other security areas.

A big driver behind their use is their high efficiency – around 100 lumens per Watt (when measured for photopic lighting conditions) Some higher-power lamps (>600 Watt) can achieve efficacies of around 150 lumens per watt.

It is very difficult to get any material which is free from corrosion in presence of sodium vapor in high temperature and pressure. This is the main difficulty of producing high-pressure sodium lamp.

In 1959, the development of polycrystalline alumina (PCA) opened a new path to introduce the high-pressure sodium vapor Lamp, as this material is very rarely affected by high pressure and temperature sodium vapor. The first lamp with 400 W, 42000 initial lumens and 6000-hour life first came in the market in 1965. But afterward, some improvements made this lamp with 50000 initial lumens with 24000 hours at 10 hours per start. We can get a lamp that has 2.4 times the lumens output of its mercury counterpart with same rated life span.

It has an inner PCA arc tube that is filled with xenon gas. This xenon gas is used for starting purpose of the lamp as ionization potential of xenon gas is lowest among all other inert gases used for this purpose. In addition to xenon gas sodium mercury amalgam is present in this arc tube, too. In each end, back wound and coated tungsten electrodes are mounted. To seal the tube monolithic seal is used instead of niobium end cap.

The arc tube is inserted into a heat resistant outer bulb. It is supported by an end clamp that is floating. This end clamp permits the entire structure to expand and contract without distorting.

The space between the tube and the bulb is a vacuum space. This vacuum space is needed to insulate heat from the arc tube because it is necessary to keep the arc tube at required temperature to sustain arc during normal operation. High pressure sodium lamp has very small diameter (3/8 inch). So there is no enough space to provide any starting electrode in the arc tube. So a higher voltage is required to initiate the arc. A ballast with igniter is used for this purpose. High voltage is fed to the lamp from the ballast by using the phenomenon of superimposing a low energy high voltage pulse.

Generally a typical pulse has a peak voltage of 2500V and it has durability for only 1 microsecond only. This high voltage pulse makes the xenon gas ionized sufficiently. Then it initiates and maintains the xenon arc. The initial arc has sky blue color. Amalgam used in the reservoir formed inside the arc tube. It is in the back of one of the electrodes. It is normally vaporized during lamp operation. As the xenon arc has started temperature of arc tube is increased which first vaporizes mercury and the lamp start glowing with bluish white color. This color represents the effect of the xenon and mercury mixture at excitation. Gradually the temperature again rises, and sodium becomes vaporized lastly and becomes excited, a low pressure monochromatic yellow sodium spectrum results. During the period of sodium spectral line becomes at 589 nm. With temperature the sodium pressure increases from 0.02 atm in the monochromatic discharge to over 1 atm in the final steady state, broad spectrum condition. Also presence of excited mercury and xenon gives bluish effect to the lamp radiation and finally pleasant golden bright light comes out.

These lamps have high luminous efficacy and life span is about 24000 hours. It has excellent lumen maintenance capability. Data of several common high pressure sodium lamps are given below.