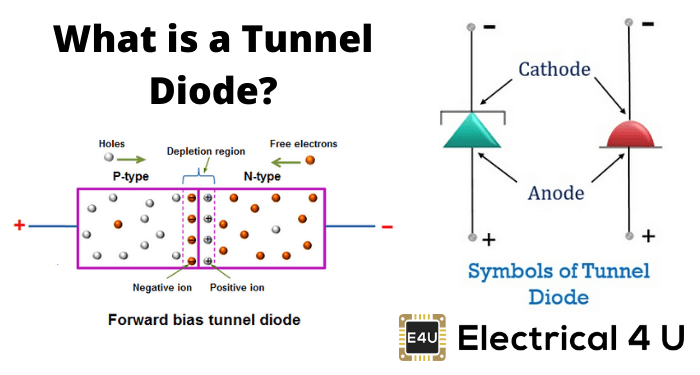 What is a Tunnel Diode?

A tunnel diode (also known as a Esaki diode) is a type of semiconductor diode that has effectively “negative resistance” due to the quantum mechanical effect called tunneling. Tunnel diodes have a heavily doped pn junction that is about 10 nm wide. The heavy doping results in a broken band gap, where conduction band electron states on the N-side are more or less aligned with valence band hole states on the P-side.

The application of transistors in a very high in frequency range are hampered due to the transit time and other effects. Many devices use the negative conductance property of semiconductors for these high frequency applications. A tunnel diode is one of the most commonly used negative conductance devices. It is also known as Esaki diode after L. Esaki for his work on this effect.

The concentration of dopants in both p and n region is very high, at around 1024 – 1025 m-3. The pn junction is also abrupt. For this reasons, the depletion layer width is very small. In the current voltage characteristics of tunnel diode, we can find a negative slope region when a forward bias is applied.

The name “tunnel diode” is due to the quantum mechanical tunneling is responsible for the phenomenon that occurs within the diode. The doping is very high so at absolute zero temperature the Fermi levels lies within the bias of the semiconductors.

When the band edge of n-side is the same as the Fermi level in p-side, the tunnel current is maximum with the further increment in the forward bias the tunnel current decreases and we get the desired negative conduction region. When the forward bias is raised further, normal pn junction current is obtained which is exponentially proportional to the applied voltage. The V-I characteristics of the tunnel diode is given,

The negative resistance is used to achieve oscillation and often Ck+ function is of very high frequency frequencies.

The symbol for a tunnel diode is shown below.

Tunnel diode is a type of sc diode which is capable of very fast and in microwave frequency range. It was the quantum mechanical effect which is known as tunneling. It is ideal for fast oscillators and receivers for its negative slope characteristics. But it cannot be used in large integrated circuits – that’s why it’s an applications are limited.

When the voltage is first applied current stars flowing through it. The current increases with the increase of voltage. Once the voltage rises high enough suddenly the current again starts increasing and tunnel diode stars behaving like a normal diode. Because of this unusual behavior, it can be used in number of special applications started below.

Oscillator Circuits:
Tunnel diodes can be used as high frequency oscillators as the transition between the high electrical conductivity is very rapid. They can be used to create oscillation as high as 5Gz. Even they are capable of creativity oscillation up to 100 GHz in a appropriate digital circuits.

Used in Microwave Circuits:
Normal diode transistors do not perform well in microwave operation. So, for microwave generators and amplifiers tunnel diode are used. In microwave waves and satellite communication equipments they were used widely, but lately their usage is decreasing rapidly, as transistors which operate in this frequency range are becoming available.

Resistant to Nuclear Radiation:
Tunnel diodes are resistant to the effects of magnetic fields, high temperature and radioactivity. That’s why these can be used in modern military equipment. These are used in nuclear magnetic resource machine also. But the most important field of its use satellite communication equipments.

Tunnel diode can make a very stable oscillator circuit when they are coupled to a tuned circuit or cavity, biased at the centre point of negative resistance region. Here is an example of tunnel diode oscillatory circuit. 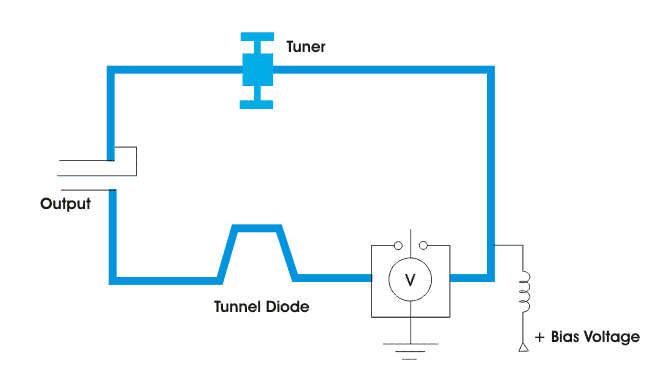 The tunnel diode is losing coupled to a tunable cavity. By using a short, antenna feed probe placed in the cavity off center loose coupling is achieved. To increase the stability of oscillation and achieve o/p power over wider bandwidth loose coupling is used. The range of the output power produced is few hundred micro-watts.

Tunnel diode oscillators which are meant to be operated at microwave frequencies, generally used some form of transmission lines as tunnel circuit. These oscillators are useful in application that requires a few millwatts of power, example- local oscillators for microwave super electrodyne receiver.