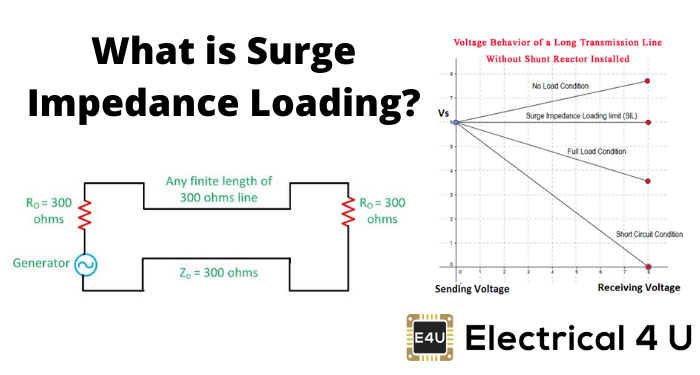 Surge Impedance Loading is a very essential parameter when it comes to the study of power systems as it is used in the prediction of maximum loading capacity of transmission lines.
However before understanding SIL, we first need to have an idea of what is Surge Impedance (Zs). It can be defined in two ways one a simpler one and other a bit rigorous.
Method 1
It is a well known fact that a long transmission lines (> 250 km) have distributed inductance and capacitance as its inherent property. When the line is charged, the capacitance component feeds reactive power to the line while the inductance component absorbs the reactive power. Now if we take the balance of the two reactive powers we arrive at the following equation

This quantity having the dimensions of resistance is the Surge Impedance. It can be considered as a purely resistive load which when connected at the receiving end of the line, the reactive power generated by capacitive reactance will be completely absorbed by inductive reactance of the line.
It is nothing but the Characteristic Impedance (Zc) of a lossless line.

We observe that the instantaneous voltage consists of two terms each of which is a function of time and distance. Thus they represent two travelling waves. The first one is the positive exponential part representing a wave travelling towards receiving end and is hence called the incident wave. While the other part with negative exponential represents the reflected wave. At any point along the line, the voltage is the sum of both the waves. The same is true for current waves also.
Now, if suppose the load impedance (ZL) is chosen such that ZL = Zc, and we know

and hence the reflected wave vanishes. Such a line is termed as infinite line. It appears to the source that the line has no end because it receives no reflected wave.
Hence, such an impedance which renders the line as infinite line is known as surge impedance.It has a value of about 400 ohms and phase angle varying from 0 to –15 degree for overhead lines and around 40 ohms for underground cables.

The term surge impedance is however used in connection with surges on the transmission line which may be due to lightning or switching, where the line losses can be neglected such that

Now that we have understood Surge Impedance, we can easily define Surge Impedance Loading.
SIL is defined as the power delivered by a line to a purely resistive load equal in value to the surge impedance of that line. Hence we can write 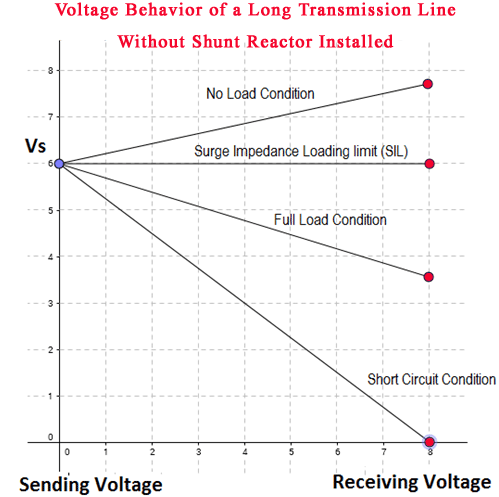 Where, Kse = % of series capacitive compensation by Cse

The equation for SIL will now use the modified Zs.