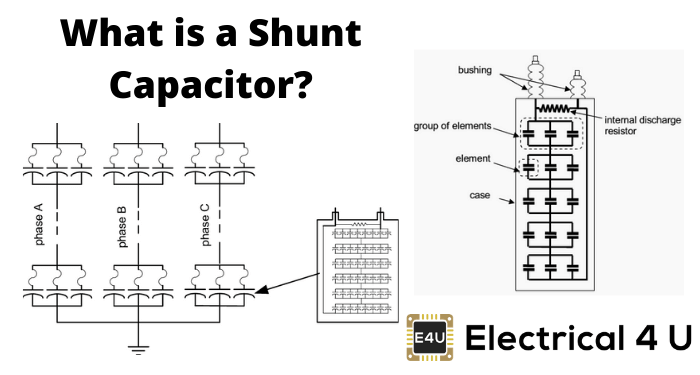 What is a Shunt Capacitor?

In addition to these, inductance of different lines also contributes inductance to the system.
Because of these inductances, the system current lags behind system voltage. As the lagging angle between voltage and current increases, the power factor of the system decreases. As the electrical power factor decreases, for same active power demand the system draws more current from source. More current causes, more line losses.

There are mainly two categories of capacitor bank according to their connection arrangements.

How to determine Rating of Required Capacitor Bank

The size of the Capacitor bank can be determined by the following formula :

Theoretically it is always desired to commission a capacitor bank nearer to reactive load. This makes transmission of reactive KVARS is removed from a greater part of the network. Moreover if capacitor and load are connected simultaneously, during disconnection of load, capacitor is also disconnected from rest of the circuit. Hence, there is no question of over compensation. But connecting capacitor with each individual load is not practical in the economical point of view. As the size of loads extremely differs for different consumers. So various size of capacitors are not always readily available. Hence proper compensation can not be possible at each loading point. Again each load is not connected with system for 24 × 7 hours. So the capacitor connected to the load also can not be fully utilized.

Hence, capacitor, is not installed at small load but for medium and large loads, capacitor bank can be installed at consumer own premises. Although the inductive loads of medium and large bulk consumers are compensated, but still there would be considerable amount of VAR demand originated from different uncompensated small loads connected to the system. In addition to that, inductance of line and transformer also contribute VAR to the system. On viewing of these difficulties, instead of connecting capacitor to each load, large capacitor bank is installed at main distribution sub-station or secondary grid sub-station.

The capacitor bank can be connected to the system either in delta or in star. In star connection, the neutral point may be grounded or not depending upon protection scheme for capacitor bank adopted. In some cases the capacitor bank is formed by double star formation.

Generally large capacitor bank in electrical substation is connected in star.
The grounded star connected bank has some specific advantages, such as,