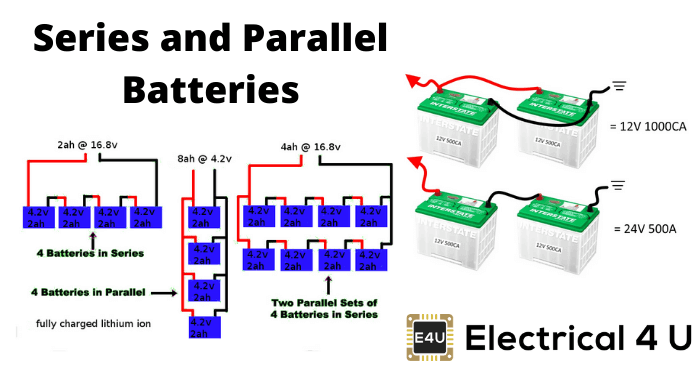 If anyone just measures the electric potential difference between two terminals of a battery when load is not connected with the battery, he or she will get the voltage developed in the battery when there is no current flowing through it. This voltage is generally referred as electromotive force or emf of battery. It is also referred as no-load voltage of battery.

The entire resistance encountered by a current as if it flows through a battery from the negative terminal to the positive terminal is known as internal resistance of battery.

Battery cells can be connected in series, in parallel and as well as a mixture of both the series and parallel.

If E is the overall emf of the battery combined by n number cells and E1, E2, E3, …………… En are the emfs of individual cells. 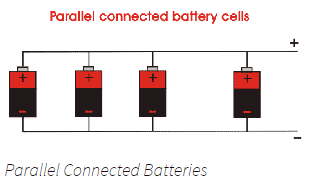 When positive terminals of all cells are connected together and similarly negative terminals of these cells are connected together in a battery, then the cells are said to be connected in parallel. These combinations are also referred as parallel batteries. If emf of each cell is identical, then the emf of the battery combined by n numbers of cells connected in parallel, is equal to the emf of each cell. The resultant internal resistance of the combination is,