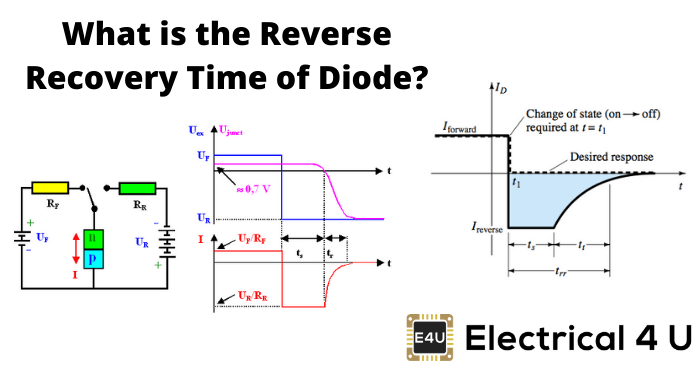 A diode when functioning in its forward bias condition has its depletion region shrinked to almost nothing. That is, the external supply voltage applied will be used by the device to overcome the barrier potential which gets imposed on it due to the presence of immobile charge carriers in its depletion region. Now, imagine that one reverse biases this voltage by inverting the polarities connected to the terminals of the diode. Ideally, the act of doing so should bring the diode from its ON state to OFF state immediately. That is, the diode which is conducting current in its forward direction is expected to stop conducting instantly.

However, practically, this cannot be experienced as the flow of majority charge carriers through the diode does not cease right at the moment of reversing the bias. They will, in fact, take a finite amount of time before stopping and this time is known as reverse recovery time of the diode.

During this reverse recovery time of the diode, one can see that there will be fairly large amount of current flowing through the diode, but in the opposite direction (Irr in Figure 1). However its magnitude reduces and gets saturated to a value of reverse saturation current, once the time-line crosses reverse recovery time (trr) of the diode. Graphically one can describe the reverse recovery time of the diode as the total time which starts from the instant at which the reverse current starts to flow through the diode to the time instant at which it reaches to zero (or any other pre-defined low level, say 25% of Irr in the figure) while decaying (td), on reaching its negative maxima (tp). 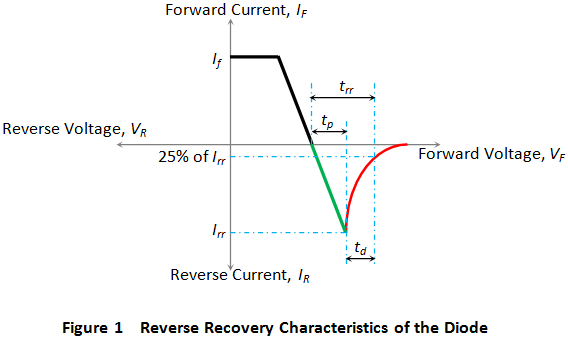 The ratio of these two time factors (viz., tp and td) is known as the softness factor. In the case of a normal diode, the time is taken by the current to decay (td) will be smaller in comparison to the time taken by the current to reach its negative peak (tp). On the other hand, for a soft recovery diode, the situation will be the reverse. That is, here, td will be larger in comparison to tp. We can see that the softness factor gives a measure of semiconductor losses incurred during switching. Greater is this ratio; greater will be the switching loss. From this, one can conclude that when we use soft-recovery diodes, the losses experienced by the semiconductor switching are more than those encountered when we use normal diodes.

This phenomenon of reverse recovery is basically parasitic effect experienced in the case of diodes and is seen to be dependent on the doping level of silicon and its geometry. Also, even the junction temperature, the rate at which the forward current falls and the value of the forward current just before the reverse biased gets applied are also seen to affect its value. Greater is the reverse recovery time; slower will be the diode and vice-versa. Thus the diodes with lesser reverse recovery time are preferred, especially when the requirement is of high switching speed. Moreover, during this time interval, there will be a significant amount of current-flow back towards the supply which provides power to the diode. Hence the reverse recovery time of the diode is an important design factor which we should consider while designing the power supplies.