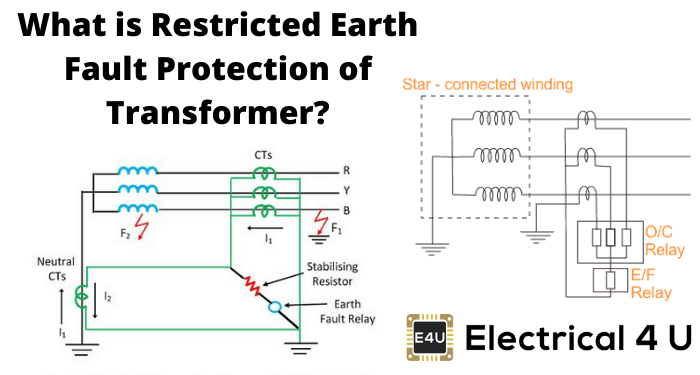 An external fault in the star side will result in current flowing in the line current transformer of the affected phase and at the same time a balancing current flows in the neutral current transformer, hence the resultant current in the relay is therefore zero. So this REF relay will not be actuated for external earth fault. But during an internal fault, the neutral current transformer only carries the unbalance fault current and operation of Restricted Earth Fault Relay takes place. This scheme of restricted earth fault protection is very sensitive for internal earth fault of electrical power transformer. The protection scheme is comparatively cheaper than differential protection scheme.

In Restricted Earth Fault scheme the common terminals of phase CTs are connected to the secondary of Neutral CT in such a manner that secondary unbalance current of phase CTs, and the secondary current of Neutral CT will oppose each other. If these both currents are equal in amplitude there will not be any resultant current circulates through the said closed path. The Restricted Earth Fault Relay is connected in this closed path. Hence the relay will not respond even there is an unbalancing in-phase current of the power transformer.