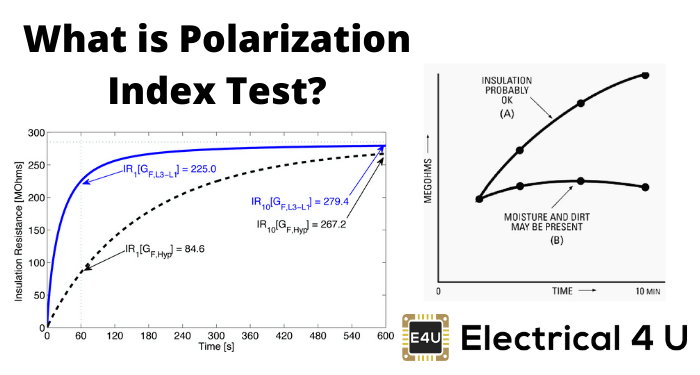 Without using separate source for direct voltage, voltmeter and ammeter for measuring corresponding voltage and current, we can use direct indicating potentiometer which is also locally called megger.

Megger gives required direct (DC) voltage across the insulator, and it also shows the resistive value of insulation directly in M – Ω and G – Ω range. We generally use 500 V, 2.5 KV and 5 KV megger depending upon the dielectric strength of the insulation. For example, we use 500V megger for measuring up to 1.1 KV rated insulation. For high voltage transformer, other HV equipment and machines, we use 2.5 or 5 KV megger depending up on the insulation level.
As all electrical insulators are dielectric in nature, they always have a capacitive property. Due to that, during application of the voltage across the electrical insulator, initially, there will be a charging current. But after few instants when the insulator becomes totally charged, the capacitive charging current becomes zero. Because of that it is recommended to measure insulation resistance at least after 1 minute (sometimes 15 seconds) from the instant of application of voltage across the insulator.

Only measuring insulation resistance by megger may not always give the reliable result. As the resistive value of an electrical insulator may also vary with temperature.
This difficulty is partially solved by introducing polarity index test or in short PI value test. We will discuss the philosophy behind PI test, below.
When we apply a voltage across an insulator, there will be a corresponding current through it. Although this current is tiny and it is in milliampere or sometimes in microampere range, it has mainly four components.

Let us discuss one by one.

When we apply a DC voltage across an insulator, because of its dielectric nature, there will be an initial high charging current through it. This current decays exponentially and becomes zero after some time. This current exists for initial 10 seconds of the test. But it takes nearly 60 seconds to decay totally.

Due to dust, moisture and other contaminants on the surface of solid insulator, there is one small component of current flows through the outer surface of the insulator.

Value of insulation resistance test or IR value test, i.e. value megger reading just after 1 minute of the test, is-

Megger value of 10 minute test, is

From the above equation it is clear that, if the value of (IR + IS) >> IP, the PI of insulator approaches to 1. And large IR or IS or both indicate unhealthiness of the insulation.
The value of PI becomes high if (IR + IS) is very small compared to IP. This equation indicates that high polarization index of an insulator implies healthiness of insulator. For good insulator resistive leakage current IR is very tiny.
It is always desired to have polarisation index of an electrical insulator more than 2. It is hazardous to have polarisation index less than 1.5.