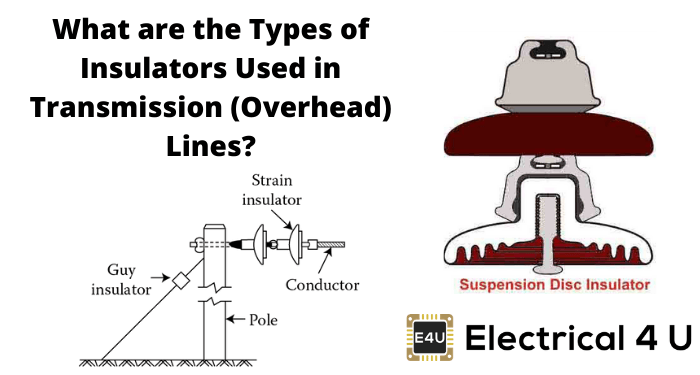 There are 5 types of insulators used in transmission lines as overhead insulation:

Pin, Suspension, and Strain insulators are used in medium to high voltage﻿ systems. While Stay and Shackle Insulators are mainly used in low voltage applications.

Pin insulators are the earliest developed overhead insulator, but are still commonly used in power networks up to 33 kV system. Pin type insulator can be one part, two parts or three parts type, depending upon application voltage.

In a 11 kV system we generally use one part type insulator where whole pin insulator is one piece of properly shaped porcelain or glass.

In addition to that rain shed or petticoats on an insulator serve another purpose. We design these rain sheds or petticoats in such a way that while raining the outer surface of the rain shed becomes wet but the inner surface remains dry and non-conductive. So there will be discontinuations of conducting path through the damp pin insulator surface.

In higher voltage systems – like 33KV and 66KV – manufacturing of one part porcelain pin insulator becomes more difficult. The higher the voltage, the thicker the insulator must be to provide sufficient insulation. A very thick single piece porcelain insulator is not practical to manufacture.

Post insulators have a higher number of petticoats and a greated height compared to pin insulators. We can mount this type of insulator on supporting structure horizontally as well as vertically. The insulator is made of one piece of porcelain and it has clamp arrangement are in both top and bottom end for fixing.

In higher voltage, beyond 33KV, it becomes uneconomical to use pin insulator because size, weight of the insulator become more. Handling and replacing bigger size single unit insulator are quite difficult task. For overcoming these difficulties, suspension insulator was developed.

In suspension insulator numbers of insulators are connected in series to form a string and the line conductor is carried by the bottom most insulator. Each insulator of a suspension string is called disc insulator because of their disc like shape.

When suspension string is used to sustain extraordinary tensile load of conductor it is referred as string insulator. When there is a dead end or there is a sharp corner in transmission line, the line has to sustain a great tensile load of conductor or strain. A strain insulator must have considerable mechanical strength as well as the necessary electrical insulating properties.

For low voltage lines, the stays are to be insulated from ground at a height. The insulator used in the stay wire is called as the stay insulator and is usually of porcelain and is so designed that in case of breakage of the insulator the guy-wire will not fall to the ground.

The shackle insulator (also known as a spool insulator) is usually used in low voltage distribution network. It can be used in both the horizontal or vertical positions. The use of such insulator has decreased recently after increasing the using of underground cable for distribution purpose.

The tapered hole of the spool insulator distributes the load more evenly and minimizes the possibility of breakage when heavily loaded. The conductor in the groove of shackle insulator is fixed with the help of soft binding wire.