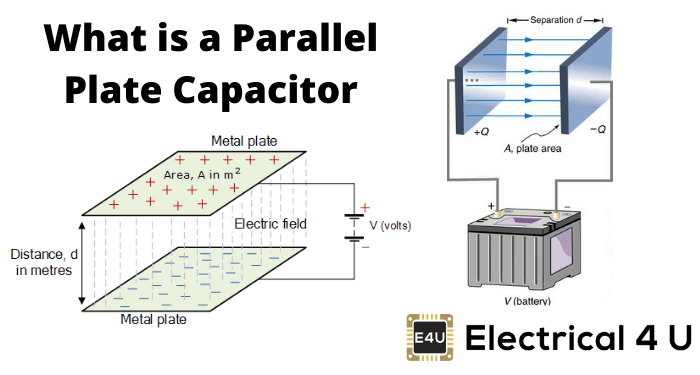 A parallel plate capacitor is an arrangement of two metal plates connected in parallel separated from each other by some distance. A dielectric medium occupies the gap between the plates. The dielectric medium can be air, vacuum or some other non conducting material like mica, glass, paper wool, electrolytic gel and many others. 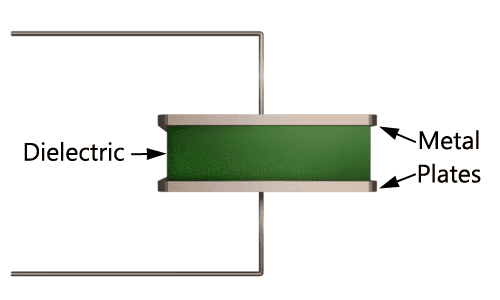 The dielectric does not allow the flow of electric current through it due to its non-conductive property. However, the atoms of the dielectric material get polarised under the effect of electric field of the applied voltage source, and thus there are dipoles formed due to polarisation due to which, a negative and positive charge get deposited on the plates of a parallel plate capacitor.

The accumulation of charges on the plates takes place due to which, a charging current flows through the capacitor until the potential difference between the plates equalises the source potential. We define a parallel plate capacitor as a device which is capable of storing electrostatic energy in the form of charge in the dielectric medium between the plates, and thus it can be visualised as equivalent to a rechargeable DC battery. If the working voltage of the capacitor increases beyond the threshold voltage limit, then a short circuit occurs between the plates due to dielectric breakdown, this breakdown occurs due to excessive heating of the dielectric medium caused by an increase in applied voltage beyond the limit results in rupturing of the capacitor. We should choose the working voltage of capacitor appropriately within the maximum threshold voltage to protect the capacitor from such situations.

We use a various dielectric medium like porcelain, mica, oxides of various metals or other similar materials having high permittivity to increase the threshold voltage level as well as charge storing capability of the capacitor. The capacitance is the function of the overlapping area of the plates, the permittivity of the medium and the distance separation between the plates.

A parallel plate capacitor behaves as open circuited when we connect a DC source across it, while it acts as a short circuit when we connect an AC source to it. The said property of a parallel plate capacitor makes it suitable for filtering of harmonics from AC supply. We can also use a parallel plate capacitor for tunning purpose in electronic circuits for various applications. We also use it in various transducers applications. A capacitor can act as a source of capacitive reactive power, and thus it serves as an essential element in power system auxiliaries for improving the power factor of the system thereby, enhancing the stability of a system. The energy storing capacity of a magnetic field is higher as compared with an electric field, because of this reason we do not usually use a parallel plate capacitor as energy storage. The dielectric used in it also suffers from a disadvantage, i.e. leakage of charge, due to which a capacitor cannot hold the charge for a long time and thus we cannot utilize it as an ideal charge storage device.