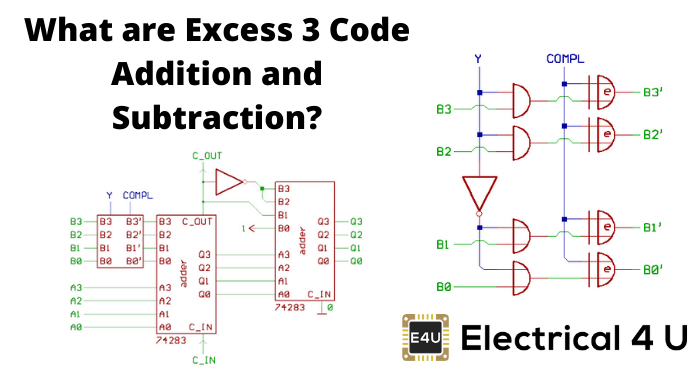 Before discussing the BCD addition and subtraction using Excess 3 code we have to know what is Excess 3 code. It is a basically a binary code which is made by adding 3 with the equivalent decimal of a binary number and again converting it into binary number. So if we consider any binary number we have to first convert it into decimal number then add 3 with it and then convert it into binary and we will get the excess 3 equivalent of that number. Now we will see how BCD addition and subtraction can be done by this method.

The operation of addition can be done by very simple method we will illustrate the operation in a simple way using steps.

Step 1
We have to convert the numbers (which are to be added) into excess 3 forms by adding 0011 with each of the four bit groups them or simply increasing them by 3.
Step 2
Now the two numbers are added using the basic laws of binary addition, there is no exception for this method.
Step 3
Now which of the four groups have produced a carry we have to add 0011 with them and subtract 0011 from the groups which have not produced a carry during the addition.
Step 4
The result which we have obtained after this operation is in Excess 3 form and this is our desired result

Similarly binary subtraction can be performed by Excess 3 Code Subtraction method. The operation is illustrated with the help of some steps.
Step 1
Like the previous method both the numbers have to be converted into excess 3 code

Now in the above mentioned operation the least significant column which needed a borrow and the other two columns did not need borrow. Now we have to subtract 0011 from the result of this column and add 0011 to the other two columns, we get 0100 1010 1010. This is the result expressed in excess 3 codes. And the binary result is 0001 0111 0111