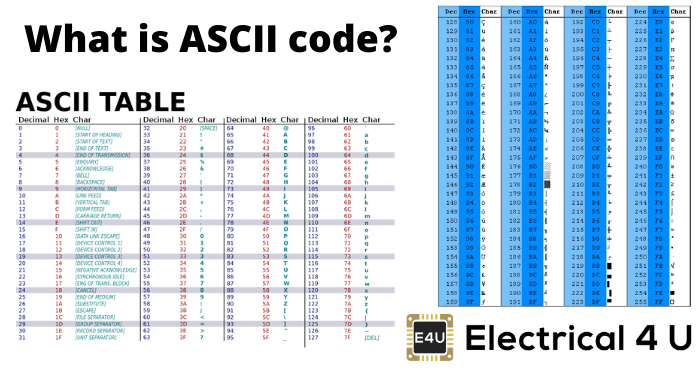 Alphanumeric codes are used to represent different data, letters, and numbers by distinguishing symbols and characters.

There are three types of alphanumeric codes: ASCII code, EBCDIC code, and Unicode. ASCII Code is the most commonly used of these (although the others are used in specific situations).

What is ASCII code

ASCII stands for ‘American Standard Code for Information Interchange’, and is pronounced as ‘ask-ee’. ASCII code is used to represent alphanumeric data in computers, communication equipment, and electronic devices in a more scientific manner. ASCII code was first published as a standard in 1967. From then it is constantly being updated and revised. In 1986 the latest version was called and published as ANSI X3.4.

ASCII code is a 7 bit code and is hence able to represent 27 = 128 characters. Currently, a total number of 95 printable characters are represented by this code including 26 upper case letters (A – Z), 26 lower case letters (a – z), 10 numerals (0 – 9), and 33 special characters which include mathematical symbols, punctuation marks and space characters.