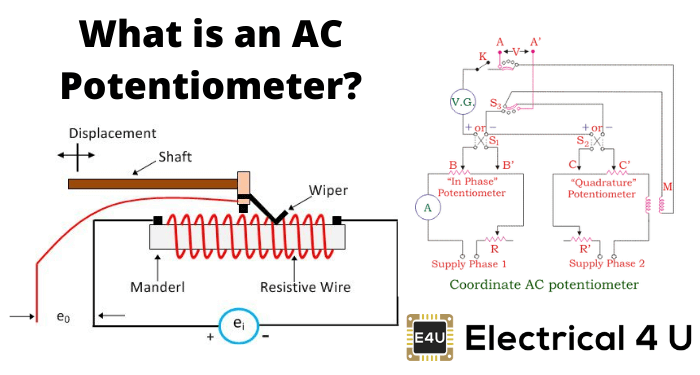 In such type of instruments, two separate scales are used to measure magnitude and phase angle on some reference of the unknown e.m.f. There is a provision on the scale that it could read phase angle up to 3600. It has electrodynamometer type ammeter along with DC potentiometer and phase-shifting transformer which is operated by single phase supply.

In a phase-shifting transformer, there is a combination of two ring-shaped laminated steel stators connected perpendicularly to each other as shown in the figure. One is directly connected to power supply and the other one is connected in series with variable resistance and capacitor. The function of the series components is to maintain constant AC supply in the potentiometer by doing small adjustments in it.

Between the stators, there is laminated rotor having slots and winding which supplies voltage to the slide-wire circuit of the potentiometer. When current start flowing from stators, the rotating field is developed around the rotor which induces an e.m.f. in the rotor winding.

The phase displacement of the rotor emf is equal to rotor movement angle from its original position and it is related to the stator supply voltage. The whole arrangement of the winding is done in such a way that the magnitude of the induced emf in the rotor may change but it does not affect the phase angle and it can be read on the scale fixed on the top of the instrument.

Therefore, resultant induced emf in the rotor winding due to two stator winding

Where, Ø gives the phase angle. You can go study similar questions to the one above in our electrical engineering MCQs.

Now to measure unknown e.m.f. its terminals are connected across sliding contacts AA’ using selector switch S3. By doing some adjustments in sliding contacts and rheostat, the whole circuit gets balanced and galvanometer reads zero at the balanced condition. Now the in-phase component VA of the unknown e.m.f. is obtained from the in-phase potentiometer and quadrature component VB is obtained from quadrature potentiometer.

Thus, the resultant voltage of the coordinate AC potentiometer is

And the phase angle is given by