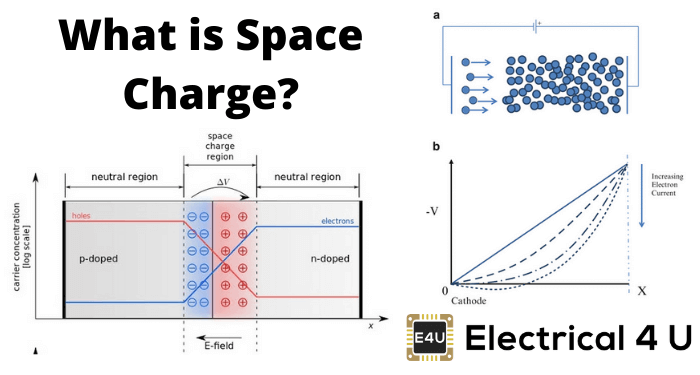 Accumulation of charges in a particular region is referred to as space charge. The space in which the charges concentrate can be either free space or a dielectric. Further, this cloud of charges might be mobile or immobile in nature. Let us try to understand better with the help of examples.
Example 1: Now, consider the case where we have brought a p-type semiconductor in contact with an n-type semiconductor. As is well known, n-type semiconductor material has excess electrons while the p-type material is depleted of them. Thus, when these two kind of materials are brought in-contact, the electrons will start moving from n-type to p-type.

This causes the electrons and holes present near the junction to recombine with each other. As a result, a certain region around the junction will be depleted of mobile charge carriers. This region is nothing but the space charge region which has immobile ions (Figure 1a).

Example 2: Next, let us assume that we have an electron tube supplied with power. In such a situation, the electrons will be ejected from the cathode terminal and will start moving towards the anode.
However these electrons cannot reach their destination instantaneously i.e. they will take some amount of finite time to complete their journey. As a result, these electrons can accumulate near the cathode end of the device forming a cloud of negative charges. This leads to the formation of negative space charge region (Figure 1b) which can move under the influence of applied electric field.

Example 2 indicates that the basic reason which leads to the accumulation of charges is the fact that the rate of removal is less when compared to the rate of accumulation. That is, the cathode terminal emits more number of electrons than those which travel towards the anode. However, even trapping of charges, drift and diffusion can contribute for the occurrence of space charge region. Further if the polarity of the charges constituting the space charge is same as that of the electrode associated, then they are called homocharges. On the other hand, if their polarities differ from each other, then they are referred to as heterocharges.

The space charge effect poses a challenge by affecting the conversion efficiency and the output power of thermionic converters. This is because when such an electron cloud is present around the metal surface, it poses an additional barrier for the electrons which are supposed to reach their final point. This inhibition for the movement of electrons is experienced in the form of repulsion for the emitted electrons from the electrons which are present in the cloud.
The space charge effect which occurs in the dielectrics also leads to the breakdown of electrical components like capacitors. This is because, when high voltages are applied, the electric charges emitted from the electrode get trapped within the gas surrounding it. The same effect is also seen to cause the failure of power cables which carry high voltages.
However, space charge effect is also seen to be advantageous in certain scenarios. For example, the presence of space charge region creates a negative EMF on certain tubes which is analogous of providing a negative bias to it. This is inturn meritorious as it helps the engineers to have a better control over the process of amplification, thus improving its efficiency.
Yet another example noteworthy of being mentioned is that the space charge has a tendency to reduce the shot noise. This is because, basically the space charge affects the easy movement of charges along their path. This inturn reduces the number of charges which arrive randomly, thereby reducing their statistical variation which is nothing but the shot noise.