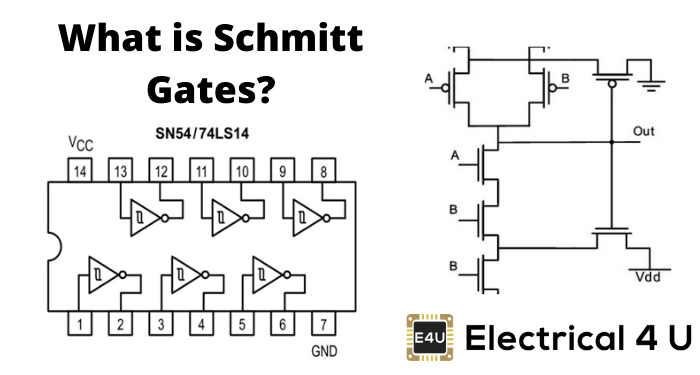 We have discussed various types of logic gates, finally we are going to discuss about another type of gate that is Schmitt Gates. The logic gates about which we have discussed till now have a single input threshold voltage level. For low to high and high to low output transitions this threshold is the same and it lies somewhere between the highest low voltage level and the lowest high voltage level. And for this these logic gates might produce an erratic output which when fed with an input which is varying slowly.

Suppose we are giving an ideal input signal to an inverter circuit and the response of that circuit is shown in the graph below.

And when a practical signal is fed to the inverter the response we get is shown in the figure below.

We can see from the diagram above that there is a small amount of noise is superimposed on the output signal. To overcome this problem a possible solution has been found which is if we differentiate the voltage levels one for low to high and other for high to low transition then this problem can be overcome.

And this should be done by introducing some positive feedback in the internal gate circuitary, which we also know as the hysteresis phenomenon. There are some logic gates which are naturally have hysteresis i.e. they have this property as built in, we don’t have to change the manufacturing procedure for them.

This is mainly seen in NAND gates and inverters. These are known as Schmitt gates and they are capable of interpreting input voltage according to two threshold voltage which is for low to high and the other one is for high to low output transition. The (a) and (b) figures below shows the circuit symbols of Schmitt NAND and Schmitt inverter.

The difference between Schmitt gates and conventional gates are that the former have the hysteresis nature which is identical to the B-H loop for a ferromagnetic material.