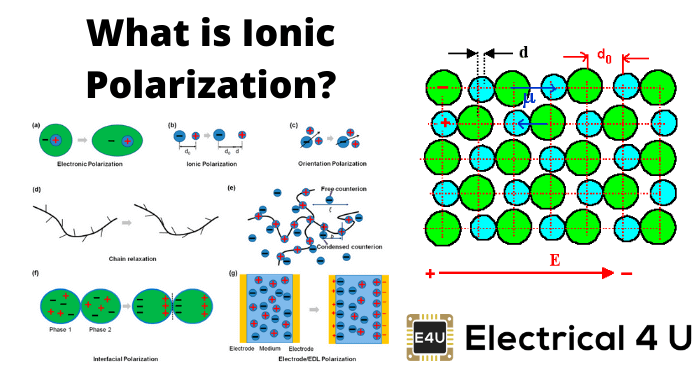 Before understanding what ionic polarization let is us observe how a sodium chloride (NaCl) molecule is formed. Sodium chloride (NaCl) molecule is formed by ionic bond between sodium and chlorine atoms. The sodium atom gives up one electron to get eight electrons in its outer most orbits. In this way the sodium atom becomes positive ion. On the other hand chlorine atom takes one electron to make eight electrons it its outermost orbits and becomes negative ion. Now due to electrostatic force between positive sodium and negative chlorine ions, they bound together and form sodium chloride molecule. Naturally, each of the sodium chloride molecules has a positive end and a negative end. Because, sodium portion of the molecule will be slightly positively charged due to presence of positive sodium ion and chlorine side will be slightly negatively charged due to presence of negative chlorine ion.

Again, when external field is applied there will be slight shifting of positive nucleus and negative electrons of each atom of the molecules. Because of that there will be an electronic dipole moment in each atom of the molecules. This electronic dipole moment is also proportional to the number of molecules per unit volume and strength of applied electric field. The proportionality constant or polarizability for that say, α electronic.