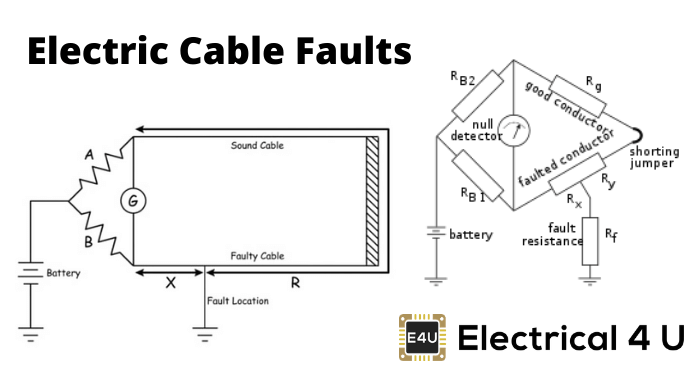 It can be of three (3) types of electric cable faults found. They are

There can be more than one of the faults at a time.
The primary cause of the 1st and 2nd fault is due to damage of insulation caused by water, moisture or other reason. Due to the defect in the armour, plumbing or the lubricant compound gets out due to excess heat, insulation of the cable can get damaged.

Detection of Fault in Cable

If fault resistance is found more then where the fault occurs, one should burn the insulation “Fault Burning” and can decrease the resistance and after that Murray Loop Test can be done. Normally V.C. high voltage pressure testing set is used in fault burning work. If there is faults in more than one core then the core which is having less resistance that is to be burnt. The burning depends upon the fault and conditions of the cable. Normally the rate of resistance comes down within 15 to 20 minute.

If there is a fault in the cable, we should detect the type of fault with a megger. We normally measure earth resistance of each core. If there is a short between the core and the earth, the I.R. of such core will show ‘ZERO” or very less in megger meter. If we do not find continuity in any core between two ends, there is an open circuit on such core. If there is no continuity in all the three cores, we can understand that the entire three cores are open circuited.
After detecting the fault, we have to repair the cable.