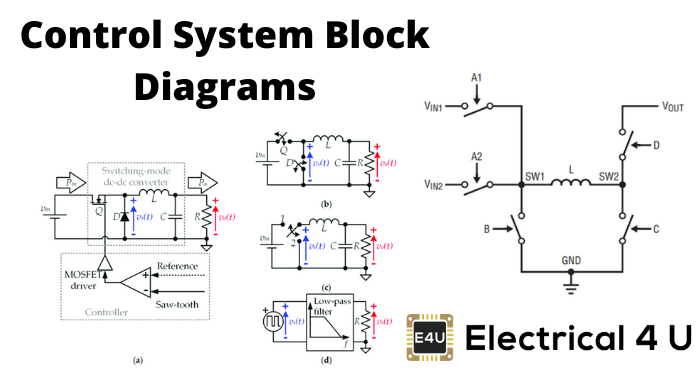 What is a Block Diagram in a Control System?

A block then represents each element’s transfer function, and they are then connected with the path of signal flow.

The diagram also shows there is a feedback path through which output signal C(s) is fed back and compared with the input R(s). The difference between input and output is which is acting as the actuating signal or error signal.

Where C(s) is the output and R(s) is the input of that particular block.

This system’s overall transfer function can be obtained by simplifying the control system by combining these individual blocks, one by one.

The technique of combining these blocks is referred to as the block diagram reduction technique.

For the successful implementation of this technique, some rules for block diagram reduction to be followed.

Take off Point in a Control System Block Diagram

When we need to apply one or the same input to more than one block, we use what’s known as the take-off point.

This point is where the input has more than one path to propagate. Note that the input does not get divided at a point.

But instead, the input propagates through all the paths connected to that point without affecting its value.

Hence, the same input signals can be applied to more than one system or block by having a take-off point.

A common input signal representing more than one block of a control system is done by a common point, as shown in the figure below with point X.

Here is also to be remembered that any block’s output will not be affected by the presence of other blocks in the cascaded system.

Now, from the diagram, it is seen that,

Where G(s) is the overall transfer function of the cascaded control system.

Instead of applying a single input signal to different blocks, as in the previous case, there may be a situation where different input signals are applied to the same block.

Here R(s), X(s), and Y(s) are the input signals. It is necessary to indicate the fine specifying the input signal entering a summing point in the control system’s block diagram.

In other words – if there is more than one summing point directly inter associated, and then they can be easily interchanged from their position without affecting the final output of the summing system.

When the same input signal is applied, different blocks and the output from each of them are added in a summing point for taking the system’s final output.

If Cone, Ctwo, and Cthree are the blocks’ outputs with transfer function Gone, Gtwo, and Gthree, then.

If the same signal is applied to more than one system, then the signal is represented in the system by a point called the take-off point.

The take-off point can be shifted to either side of the block.

Hence another block of the inverse of transfer function G(s) is to be put on that path to get R(s) again.

Now let us examine when the take-off point is shifted before the block, which was previously after the block.

Here the output is C(s), and the input is R(s) and hence.

Here, we have to put one block of transfer function G(s) on the path so that output again comes as C(s).

Let us examine the summing point shifting from a position before a block to a position after a block.

There are two input signals, R(s) and ± X(s), entering in a summing point at position A. The output of the summing point is R(s) ± X(s).

The resultant signal is the input of a control system block of transfer function G(s), and the final output of the system is

Hence, a summing point can be redrawn with input signals R(s)G(s) and ± X(s)G(s)

At the summing point, the input signal R(s) will be added to B(s) and produces the actual input signal or error signal of the system, and it is denoted by E(s).