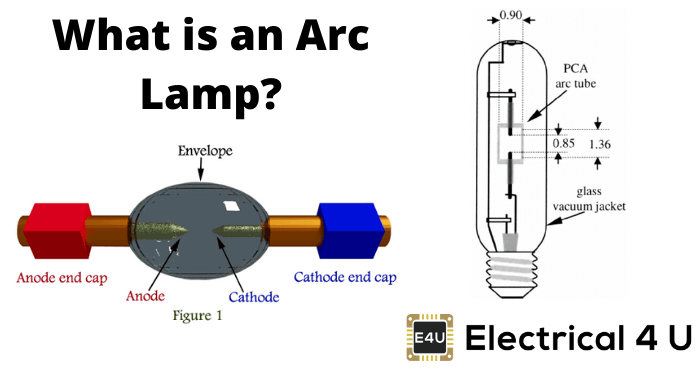 What is an Arc Lamp?

An arc lamp is a type of electric lamp which produces light by creating an arc in the space between two electrodes when electrical energy is supplied. In the early 1800s, Sir Humphry Davy invented the first arc lamp. In that first lamp, two electrodes of carbon were used. The arc was produced between the electrodes in the air. It was used in searchlights, movie projectors (high-intensity light).

Nowadays, gas discharge lamps are widely used. It is preferred to carbon arc lamps due to high efficiency. Here, the light is produced by the arc as in the case of a carbon arc lamp but an inert gas is filled between the electrodes.

The high-intensity light is produced by this carbon vapor which is highly luminous in the arc. The color of the light produced depends on the temperature, time and electrical characteristics.

In gas discharge lamps, the arc is produced in the space between the electrodes. Here, space is filled with an inert gas. The arc is produced by the ionization of this particular gas. The electrodes and the gas together are covered with a glass tube. When the electrodes are given high voltage power supply, the atoms in the gas experienced an inconceivable electric force and it results in the splitting of the atoms into free electrons and ions. Thus the ionizing of gas takes place (ionization process).

This is known as the formation of the arc and is done by the discharging process. So it is also known as discharge lamps. The name of the arc lamp and color of light emitted will directly depend on the atomic structure of the inert gas that is filled in the glass tube.

The typical temperature of an arc is over 3000°C or 5400°C. The color of the light emitted by the xenon arc lamp is white (similar to natural daylight) which is used widely. From the neon arc lamp, we get a red color and from the mercury arc lamp, bluish color is obtained. The combination of inert gasses is also used. They will give a more even light spectrum in a wider range of wavelengths.

Arc lamps are commonly used in: