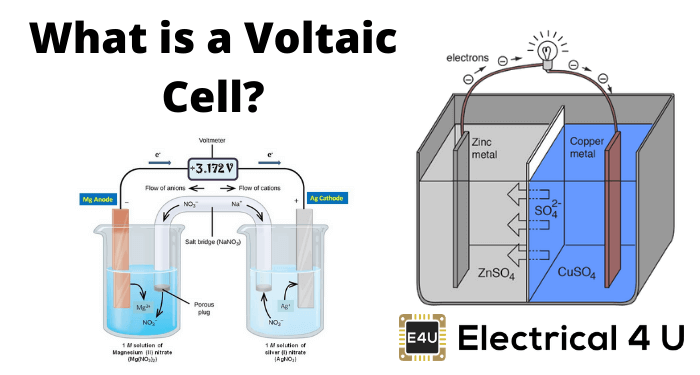 Less reactive metal will attract positive ions present in the electrolyte, and hence these positive ions get deposited on the plate making the plate positively charged. Here in this case of simple voltaic cell, the zinc comes out in the sulfuric acid solution as positive ion and then reacts with negative SO4 − − ion of the solution and forms zinc sulfate (ZnSO4). As the copper is less reactive metal, the positive hydrogen ions of the sulfuric acid solution have a tendency to get deposited on the copper plate. More zinc ions coming out in the solution means more number of electrons leave in the zinc plate. These electrons then pass through the external conductor connected between zinc and copper plates.

However, this action stops when the contact potential between Zn and dilute sulfuric acid reaches the value of 0.62 Volt. During operation of a voltaic cell, the zinc late is at a lower potential with respect of the solution film adjacent to it as shown in the figure below.

Similarly, when Cu plate is placed in contact with the electrolyte, then the positive hydrogen ions in the solution have a tendency to get deposited on it until its potential rises nearly to 0.46 V above that solution. Hence, the electrical potential difference developed in a voltaic cell is 0.62 − (− 0.46) = 1.08 Volts.

In a simple voltaic cell there are mainly two drawbacks, referred as polarization and local action.

It is observed that in this cell, the current gradually gets reduced and after a certain time of its operation, the current may cease altogether. This decrease in current is due to the deposition of hydrogen on the copper plate. Although the hydrogen comes out from the cell in form of bubbles, still there is a formation of a thin layer of hydrogen on the plate surface. This layer acts as an electrical insulation, thereby increase the internal resistance of the cell. Because of this insulating layer, further hydrogen ions cannot get electrons from the copper plate and get deposited in ion form. This layer of positive hydrogen ions on the copper plate exerts a repulsive force on other hydrogen ions which are approaching the copper plate. Hence the current gets reduced. This phenomenon is known as polarization.

It is found that even when the voltaic cell is not supplying any current, zinc continuously gets dissolved in the electrolyte. This is due to the fact that some traces of impurities like iron and lead in commercial zinc form tiny local cells which are short-circuited by the main body of zinc. The action of these parasitic cells cannot be controlled so that there is some wastage of zinc. This phenomenon is known as local action.