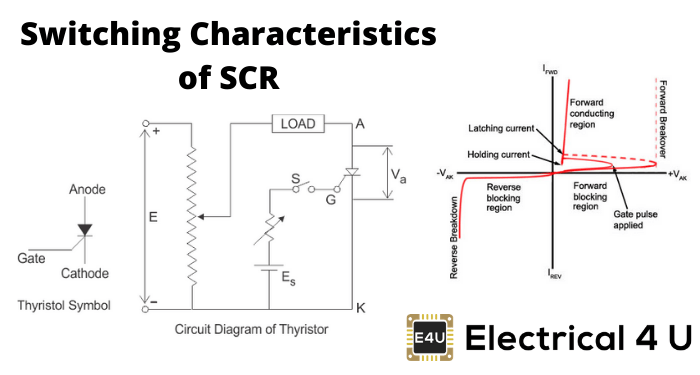 Turn ON Time of SCR

A forward biased thyristor can be turned on by applying a positive voltage between gate and cathode terminal. But it takes some transition time to go from forward blocking mode to forward conduction mode. This transition time is called turn on time of SCR and it can be subdivided into three small intervals as delay time (td) rise time(tr), spread time(ts).

After application of gate current, the thyristor will start conducting over a very tiny region. Delay time of SCR can be defined as the time taken by the gate current to increase from 90% to 100% of its final value Ig. From another point of view, delay time is the interval in which anode current rises from forward leakage current to 10% of its final value and at the same time anode voltage will fall from 100% to 90% of its initial value Va.

Rise time of SCR in the time taken by the anode current to rise from 10% to 90% of its final value. At the same time anode voltage will fall from 90% to 10% of its initial value Va. The phenomenon of decreasing anode voltage and increasing anode current is entirely dependent upon the type of the load. For example if we connect a inductive load, voltage will fall in a faster rate than the current increasing. This is happened because induction does not allow initially high voltage change through it. On the other hand if we connect a capacitive load it does not allow initial high voltage change through it, hence current increasing rate will be faster than the voltage falling rate.

High increasing rate of dia/dt can create local hot spot in the device which is not suitable for proper operation. So, it is advisable to use a inductor in series with the device to tackle high dia/dt. Usually, the value of the maximum allowable di/dt is in the range of 20 to 200 A per microsecond. Note that you can learn more by studying some of the basic electronics questions we have here at Electrical4U.

It is the time taken by the anode current to rise from 90% to 100% of its final value. At the same time the anode voltage decreases from 10% of its initial value to smallest possible value. In this interval of time conduction spreads all over the area of cathode and the SCR will go to fully ON State. Spread time of SCR depends upon the cross-sectional area of cathode.

Turn OFF Time of SCR

Once the thyristor is switched on or in other point of view, the anode current is above latching current, the gate losses control over it. That means gate circuit cannot turn off the device. For turning off the SCR anode current must fall below the holding current. After anode current fall to zero we cannot apply forward voltage across the device due to presence of carrier charges into the four layers. So we must sweep out or recombine these charges to proper turn off of SCR. So turn off time of SCR can be defined as the interval between anode current falls to zero and device regains its forward blocking mode. On the basis of removing carrier charges from the four layers, turn off time of SCR can be divided into two time regions,

It is the interval in which change carriers remove from J1, and J3 junction. At time t1, anode current falls to zero and it will continue to increase in reverse direction with same slope (di/dt) of the forward decreasing current. This negative current will help to sweep out the carrier charges from junction J1 and J3. At the time t2 carrier charge density is not sufficient to maintain the reverse current hence after t2 this negative current will start to decrease. The value of current at t2 is called reverse recovery current. Due to rapid decreasing of anode current, a reverse spike of voltage may appear across the SCR. Total recovery time t3 – t1 is called reverse recovery time. After that, device will start to follow the applied reverse voltage and it gains the property to block the forward voltage.