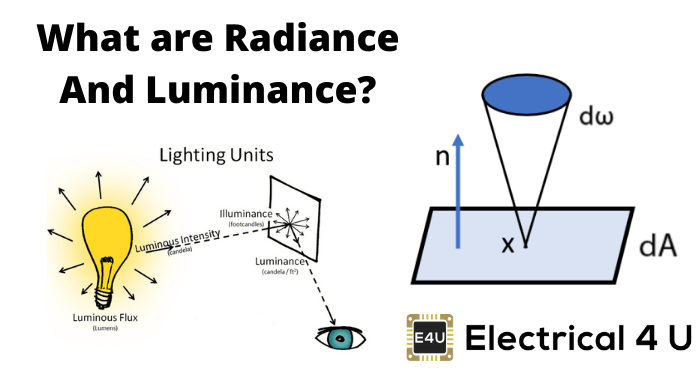 The radiant flux emitted from a point source in a certain direction per unit solid angle per unit projected area perpendicular to the specified direction is called radiance.
Radiance is denoted by Le,λ and it is equal to the double derivative of radiant flux with respect to projected surface area As and Solid angle ωs.

In case of photometric quantity, the radiance is called as Luminance.
We can use the conversion equation to obtain luminance from radiance.

Where, Km is the constant which is called maximum spectral luminous efficacy and its value is 683 lm/W.

So Luminance is the Luminous flux radiated from a point light source per unit solid angle and per unit projected area perpendicular to the specified direction.
Luminance is denoted by

The basic relationship between the luminance and the luminous flux is given below,
Φ = LG,
G is the geometric angle in steradian.

Brightness is the Luminance

Luminance can’t be increased or decreased by any optical system. A system can only redirect the luminous flux. Suppose a page of a book has been considered with certain luminance. Then we can follow the equation below,

Where, Km is the constant which is called maximum spectral luminous efficacy and its value is 683 lm/W.
Lv is luminance measured in cd/m2 and Le,λ is the radiance measured in W/m2-sr.