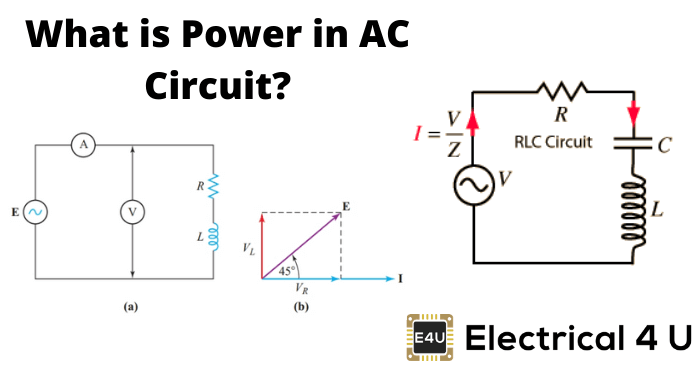 The total power of a three-phase AC circuit is equal to three times the single phase power.

But if the three-phase system is not exactly balanced, then the total power of the system would be the sum of the power of individual phases.

Suppose, in a three phase system, the power at R phase is PR , at Y phase is PY and at B phase is PB, then total power of the system would be

This is simple scalar sum, since power is a scalar quantity. This is the season, if we consider only single phase during calculating and analyzing of three phase power, it is enough.

Let us consider, network A is electrically connected with network B as shown in the figure below:

Let us consider the expression of the voltage waveform of a single phase system is:

Where V is the amplitude of the waveform, ω is the angular velocity of propagation of the wave.

Now, consider the current of the system is i(t) and this current has a phase difference from the voltage by an angle φ. That means current wave propagates with φ radiant lag in respect of the voltage. The voltage and current waveform can be represented graphically as shown below:

The current waveform in this case can be represented as:

Now, the expression of the instantaneous power,

Now, let us plot the term P versus time,

It is seen from the graph that, the term P does not have any negative value. So, it will have a nonzero average value. It is sinusoidal with a frequency twice of system frequency. Let us now plot second term of the power equation, i.e. Q.

This is purely sinusoidal and has a zero average value. So from of these two graphs, it is clear that P is the component of power in an AC circuit, which actually transported from network A to network B. This power is consumed in network B as electric power.

Q on the other hand does not really flow from network A to network B. Rather it oscillate between network A and B. This is also component of power, actually flowing into and out of the inductor, capacitor like energy storage elements of the network.

We have already considered,

where, S is the product of root mean value of voltage and current i.e.

This product of RMS value of voltage and current of a system is referred as apparent power is Voltage Ampere or VA. So,

This can be represented in complex form as

Again, the expression of the real power is

where ɸ is the angle between voltage and current phasor. So,

So, here in the expression P, cos ɸ is the factor which determines the real power component of an apparent power S.

This is why the term cos ɸ in the expression of real power is called power factor. For both positive and negative value of ɸ, cos ɸ is always positive.

This implies, regardless of the sign of ɸ (which is dependent on whether the current is lagging or leading the voltage) real power is always positive.

Now if the current is leading the voltage, then the angle between voltage and current phasor is negative, taking the voltage phasor as reference:

In that case the reactive component of the power is negative,

The relation between apparent power to active power and reactive power can be represented in trigonometric form as shown below.

In this case, the reactive component of power is positive. Since,

The power triangle is represented as shown below.

If the network is purely resistive, there would not be any angular difference between current and voltage. Hence,

So the reactive power in this case would be,

Thus, there is no reactive power generated or consumed in the network.