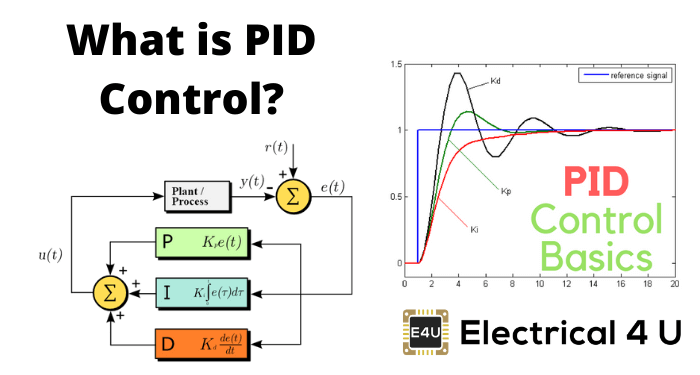 PID control stands for proportional–integral–derivative control. PID control is a feedback mechanism used in a control system. This type of control is also termed as three-term control, and is implemented by a PID Controller. By calculating and controlling three parameters – the proportional, integral and derivative of how much a process variable deviates from the desired set point value – we can achieve different control actions for specific work.

The Laplace transform of the actuating signal incorporating PID control is

There are some control actions which can be achieved by using any of the two parameters of the PID controller. Two parameters can work while keeping the third one to zero. So PID controller becomes sometimes PI (proportion-integral), PD (proportional-derivative) or even P or I. The derivative term D is responsible for noise measurement while the integral term is meant for reaching the targeted value of the system. In early days PID controller was used as a mechanical device. These were pneumatic controllers as they were compressed by air. Mechanical controllers include spring, lever or mass. Many complex electronic systems are provided with a PID control loop. In modern days PID controllers are used in PLC (programmable logic controllers) in the industry. The proportional, derivative and integral parameters can be expressed as – Kp, Kd and Ki. All these three parameters have an effect on the closed loop control system. It affects rise time, settling time and overshoot and also the steady state error.

Proportional Control: Here actuating signal for the control action in a control system is proportional to the error signal. The error signal being the difference between the reference input signal and the feedback signal obtained from input.

A PID controller has some limitations also apart from being one of the best controllers in control action system. PID control is applicable to many control actions but it does not perform well in case of optimal control. Main disadvantage is the feedback path. PID is not provided with any model of the process. Other drawbacks are that PID is linear system and derivative part is noise sensitive. Small amount of noise can cause great change in the output.