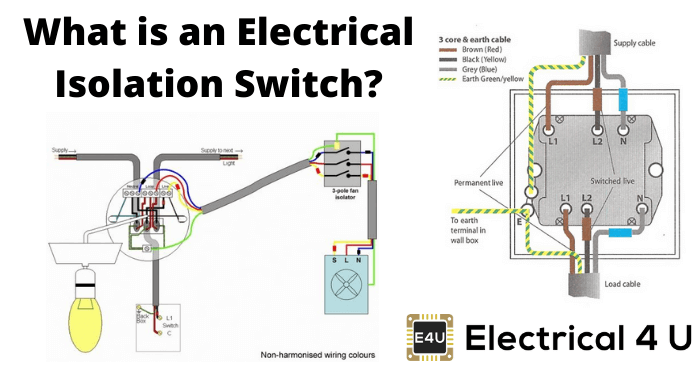 Circuit breaker always trip the circuit but open contacts of breaker cannot be visible physically from outside of the breaker, and that is why it is recommended not to touch any electrical circuit just by switching off the circuit breaker. So for better safety, there must be some arrangement so that one can see the open condition of the section of the circuit before touching it. The isolator is a mechanical switch which isolates a part of the circuit from the system as when required. Electrical isolators separate a part of the system from rest for safe maintenance works. So the definition of isolator can be rewritten as an isolator is a manually operated mechanical switch which separates a part of the electrical power. Isolators are used to open a circuit under no load. Its main purpose is to isolate one portion of the circuit from the other and is not intended to be opened while current is flowing in the line. Isolators are generally used on both ends of the breaker so that repair or replacement of circuit breaker can be done without any danger.

Depending upon the position in the power system, the isolators can be categorized as

As no arc quenching technique is provided in isolator it must be operated when there is no chance current flowing through the circuit. No live circuit should be closed or open by isolator operation. A complete live closed circuit must not be opened by isolator operation, and also a live circuit must not be closed and completed by isolator operation to avoid huge arcing in between isolator contacts. That is why isolators must be open after circuit breaker is open, and these must be closed before circuit breaker is closed. The isolator can be operated by hand locally as well as by motorized mechanism from a remote position. Motorized operation arrangement costs more compared to hand operation; hence decision must be taken before choosing an isolator for the system whether hand operated or motor operated economically optimum for the system. For voltages up to 145 KV system hand operated isolators are used whereas for higher voltage systems like 245 KV or 420 KV and above motorized isolators are used.