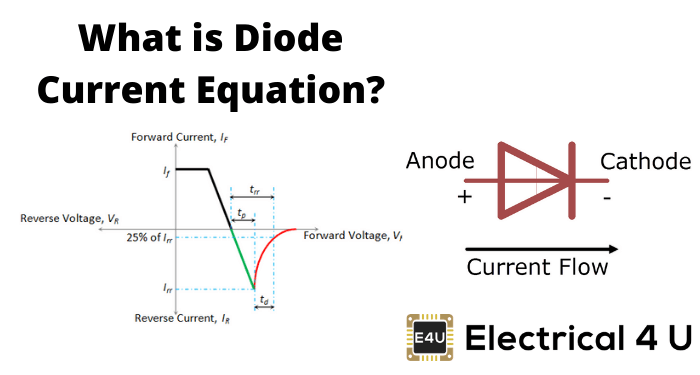 What is the Diode Current Equation?

In this equation, two parameters require to be discussed in quite detail.

They are I0, the Dark Saturation Current, and η, the (exponential) Ideality Factor.

Dark saturation current (I0) indicates the leakage current density flowing through the diode in the absence of light (hence, ‘dark’).

This parameter is the characteristic of the diode under consideration and indicates the amount of recombination which occurs within it.

Ideality factor (η) indicates the nearness with which the considered diode behaves with respect to the ideal diode.

The value of η is typically considered to be 1 for germanium diodes and 2 for silicon diodes.

However, its exact value for the given diode depends on various factors like electron drift, diffusion, carrier recombination which occurs within the depletion region, its doping level, manufacturing technique and the purity of its materials.

In addition, its value is also seen to vary with the value of current and voltage levels. Nevertheless, in most of the cases, its value is found to be within the range 1 to 2.

In forward biased condition, there will a large amount of current flow through the diode. Thus the diode current equation (equation 1) becomes

On the other hand, if the diode is reverse biased, then the exponential term in equation (1) becomes negligible. Thus we have

Now let us examine the mode the diode current equation takes its form when we have the diode operating at room temperature. In this case, T = 300 K, also,

By reciprocating, one gets, 25.87 mV which is called thermal voltage. Thus the diode equation at room temperature becomes