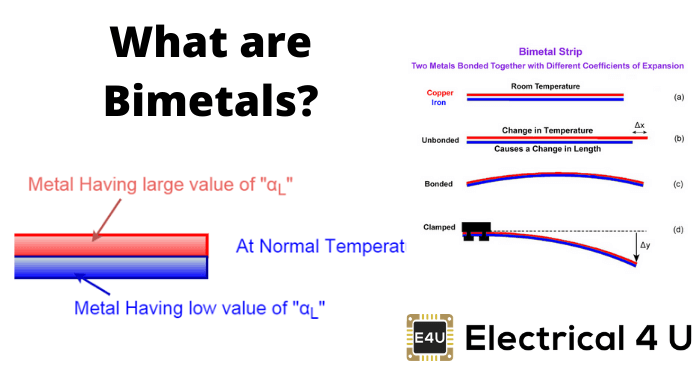 The working of bimetals is based on the theory that a metal expends on heating and contracts on cooling. If we consider a strip of metal of length of l. When the temperature increases, it length increased. The increase in length of strip due to rise in temperature is related by Coefficient of linear thermal expansion. It denoted by “αL”.

Bimetal is consists of two strips of two different metals having different Coefficient of linear thermal expansion, welded together lengthwise. A bimetal at normal temperature is shown in figure below.

Bimetal are having many applications. Some of these are listed below-

In operation as a thermostat, one end of bimetal is fixed and connected to source of supply. Other end is free to move. An electrical contact is connected on free end of bimetal, which moves with the expansion and bending of bimetal. At normal temperature, this moving contact makes the contact with fixed contact as shown in figure below. When the heat is produce this bimetallic strip bends. Due to which the contact attached with the free to move end of bimetallic strip moves and disconnects from fixed contact as shown in figure below. Again when the temperature decrease and come back to normal condition, the bimetal comes back the normal condition and as the circuit is closed by bimetal. An example of this type of thermostat is thermostat used in electric iron.

In above figure, the bimetal is a straight strip, however it can be made in the form of a coil (as shown in figure below) to increase the length in order to increase the sensitivity of thermostat. 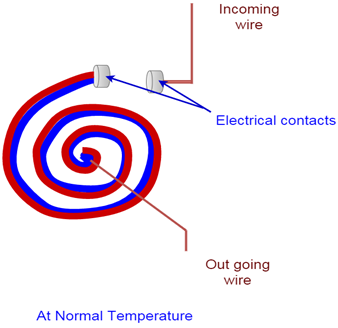 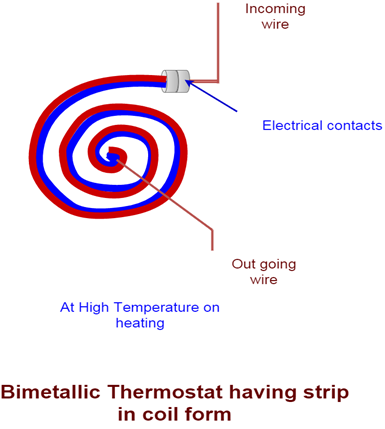 Mechanical clock system is very much sensitive to temperature which results in error in operation of watch. By using bimetallic strip, the error can be compensated up to a considerable extent. 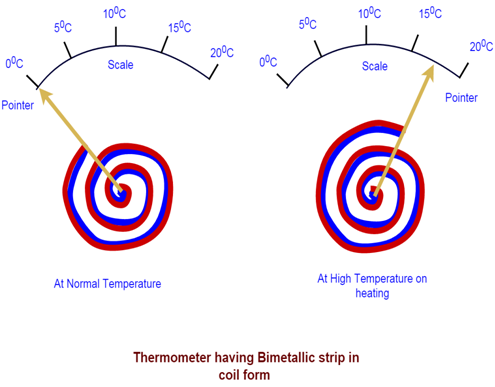