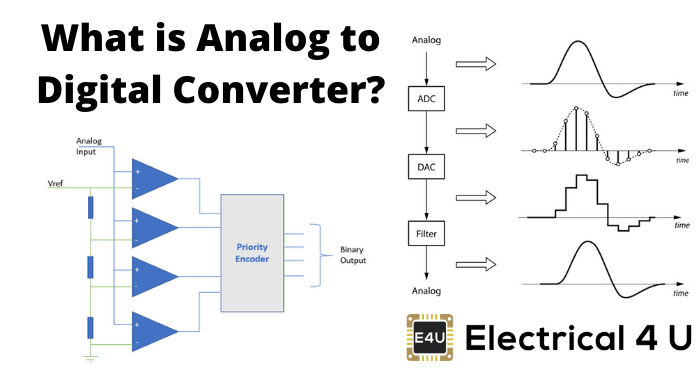 From the name itself it is clear that it is a converter which converts the analog (continuously variable) signal to digital signal. This is really an electronic integrated circuit which directly converts the continuous form of signal to discrete form. It can be expressed as A/D or A-to-D or A-D or ADC. The input (analog) to this system can have any value in a range and are directly measured. But for output (digital) of an N-bit A/D converter, it should have only 2N discrete values. This A/D converter is a linkage between the analog (linear) world of transducers and discreet world of processing the signal and handling the data. The digital to analog converter (DAC) carry out the inverse function of the ADC. The schematic representation of ADC is shown below.

There are mainly two steps involves in the process of conversion. They are

The whole ADC conversion process is shown in figure 2.

In the process of Sample and hold (S/H), the continuous signal will gets sampled and freeze (hold) the value at a steady level for a particular least period of time. It is done to remove variations in input signal which can alter the conversion process and thereby increases the accuracy. The minimum sampling rate has to be two times the maximum data frequency of the input signal.

For understanding quantizing, we can first go through the term Resolution used in ADC. It is the smallest variation in analog signal that will result in a variation in the digital output. This actually represents the quantization error.

Quantizing: It is the process in which the reference signal is partitioned into several discrete quanta and then the input signal is matched with the correct quantum.

Encoding: Here; for each quantum, a unique digital code will be assigned and after that the input signal is allocated with this digital code. The process of quantizing and encoding is demonstrated in the table below. 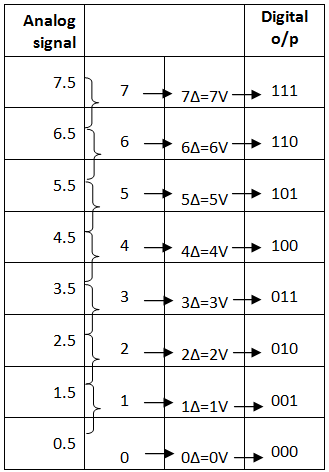 From the above table we can observe that only one digital value is used to represent the whole range of voltage in an interval. Thus, an error will occur and it is called quantization error. This is the noise introduced by the process of quantization. Here the maximum quantization error is

Improvement of Accuracy in ADC

Types of Analog to Digital Converter