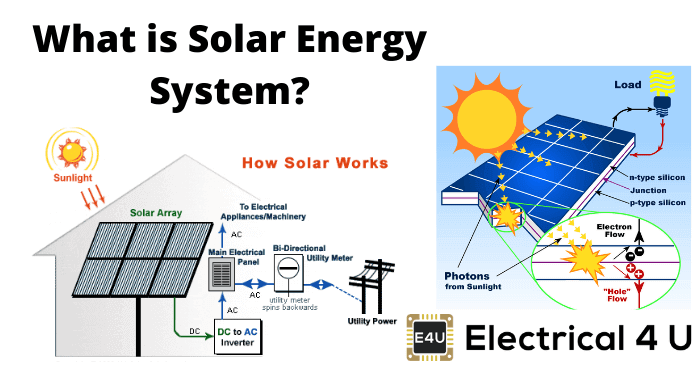 Solar energy is the light and radiant heat from the Sun that control Earth’s climate and weather and protract life. It is a renewable source of energy and originates with the thermonuclear process that transfers about 650,000,000 tons of hydrogen to helium per second. This action produces lots of heat and electromagnetic radiation. The produced heat remains in the sun and is helpful in upholding the thermonuclear reaction and electromagnetic radiation together with visible, infrared and ultra-violet radiation flow out into space in all directions. Solar energy is in reality nuclear energy. Similar to all stars, the sun is a large gas sphere made up mostly of hydrogen and helium gas. In the internal surface of sun 25% of hydrogen is fusing into helium at a rate of about 7 × 1011 kg of hydrogen per second.

Heat from the center is first and foremost spread out, and then sends down, to the Sun surface, where it keeps up at a temperature of 5800 K. According to Stefan-Boltzmann’s Law, the total energy that is released by the Sun, and therefore, the quantity of solar energy that we get here on Earth, is significantly reliant upon this surface temperature. Now a day’s solar energy system play an important role in the field of producing electricity or other domestic uses like water heating, cooking etc. As we know that major part of generated electricity or electricity depends upon coal which is used in thermal power plant (in In India 65% of total power is generated by the thermal power plant). But the main problem is here that the fuel used in thermal power plant is coal which is in limited amount and may be not available in future to produce or generate electricity. That is the main reason to solar energy system comes to the picture.

Solar energy system is the pollution free source of energy and always available because, sun is the single source of solar energy (also known as renewable energy or non conventional energy) which sits at the central point of solar system and radiate energy at an tremendously huge and fairly constant rate, per day per year as the form of electromagnetic radiation. Sun contained huge amount of energy but the whole energy not utilized at earth due to some reason like-

But the main thing is that after these obstacles sun energy reach to earth is sufficient to produce or generate electricity which is polluted free. Due to this consideration somewhat we reduce the use of Thermal Power Plant, Gas Power Plant etc and reserve the non renewable energy sources like coal, petroleum etc for future. In recent years solar energy system is rise as a primary source of energy that converted into electricity and almost all country in the world utilize maximum solar energy to produce electricity and this is very less costly.
The main benefit of solar energy system is that the sun light is present everywhere free of cost. To produce electricity or convert solar energy to other form of energy first we invest heavy amount for solar panel that convert solar energy to other form but the main advantage is after that installation no any type of maintenance is required for 40 to 50 years.

First solar collector created by Swiss scientist named Horace-Benedict de Saussure in 1767, he take an insulated box enclosed with three layers of glass which suck up heat energy. After that Saussure’s box became famous and widely known as the first solar oven, getting temperatures of 230 degrees Fahrenheit. After that in 1839 a most important landmark in the progression of solar energy occurs with the significant of the photovoltaic effect by a French scientist Edmond Becquerel. In this he used two electrodes placed in an electrolyte and then exposing it to the light and results is tremendous electricity increased a lot. After that lots of experiment are occurred by various scientists at time to time and modified our solar energy system to produce more electricity from solar energy. But now a day’s also in this field various experiments are doing by a scientist, how to utilize maximum solar energy which is available on the earth.

In 1873, Willoughby Smith discovered photoconductivity of a material known as selenium. In 1887 there was the discovery of the ultraviolet ray capacity to cause a spark jump between two electrodes and this was done by Heinrich Hertz. In 1891 the first solar heater was created. In 1893 the first solar cell was introduced. In 1908 William J. Baileys invented a copper collector which was constructed using copper coils and boxes. In 1958, solar energy was used in space. In the 1970′s, Exxon Corporation designed an efficient solar panel which was less costly to manufacture. Less cost manufacturing process of solar panel became the major milestone in the history of solar energy. In 1977 the US government embraced the use of solar energy by launching the Solar Energy Research Institute. In 1981, Paul Macready produced the first solar powered aircraft. in the year 1982 there was the development of the first solar powered cars in Australia. In 1999 the largest plant was developed producing more than 20 kilowatts.