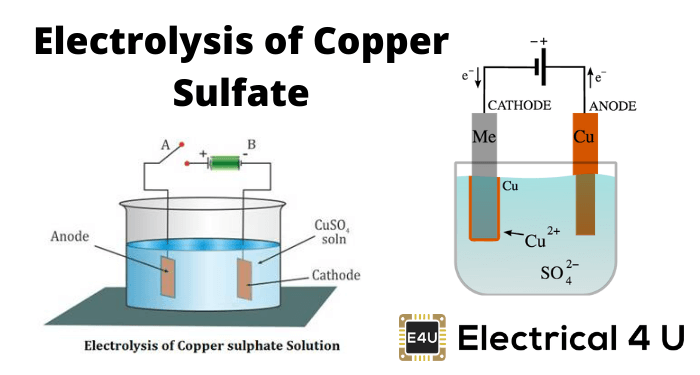 In ionic bonds, one atom loses its valence electrons and another atom gains electrons. As a result, one atom becomes positively charged ion and another atom becomes a negative ion. Due to opposite charge both attract each other and form a bonding between them called the ionic bond. In ionic bond, the force acting between the ions is Coulombic force which is inversely proportional to the permittivity of the medium. The relative permittivity of water is 80 at 20oC. So, when any ionic bonded chemical is dissolved in water, the bonding strength between ions becomes much weaker and hence its molecules split into cations and anions moving freely in the solution.

Now we will immerse two metal rods in the solution and we will apply an electrical potential difference between the rods externally by a battery.

These partly immersed rods are technically referred as electrodes. The electrode connected with negative terminal of the battery is known as cathode and the electrode connected with positive terminal of the battery is known as anode. The freely moving positively charged cations are attracted by cathode and negatively charged anions are attracted by anode. In cathode, the positive cations take electrons from negative cathode and in anode, negative anions give electrons to the positive anode. For continually taking and giving electrons in cathode and anode respectively, there must be flow of electrons in the external circuit of the electrolytic. That means, current continues to circulate around the closed loop created by battery, electrolytic and electrodes. This is the most basic principle of electrolysis.

Whenever copper sulfate or CuSO4 is added to water, it gets dissolved in the water. As CuSO4 is an electrolyte, it splits into Cu+ + (cation) and SO4 − − (anion) ions and move freely in the solution.

Now we will immerse two copper electrodes in that solution.

The Cu+ + ions (cation) will be attracted towards cathode i.e. the electrode connected to the negative terminal of the battery. On reaching on the cathode, each Cu+ + ion will take electrons from it and becomes neutral copper atoms.

Similarly the SO4 − − (anion) ions will be attracted by anode i.e. the electrode connected to the positive terminal of the battery. So SO4 − − ions will move towards anode where they give up two electrons and become SO4 radical.

But since SO4 radical can not exist in the electrical neutral state, it will attack copper anode and will form copper sulfate.

In the above process, after taking electrons the neutral copper atoms get deposited on the cathode. At the same time, SO4 reacts with copper anode and becomes CuSO4 but in water it can not exist as single molecules instead of that CuSO4 will split into Cu+ +, SO4 − − and dissolve in water. So it can be concluded that, during electrolysis of copper sulfate with copper electrodes, copper is deposited on cathode and same amount of copper is removed from anode. If during electrolysis of copper sulfate, we use carbon electrode instead of copper or other metal electrodes, then electrolysis reactions will be little bit different. Actually SO4 can not react with carbon and in this case the SO4 will react with water of the solution and will form sulfuric acid and liberate oxygen.

The process described above is known as electrolysis.