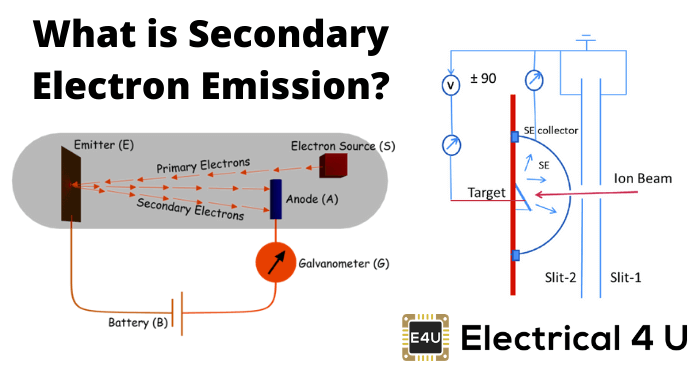 What is Secondary Electron Emission?

When a beam of high-speed electrons or other similar particles strikes on a metal surface, the part of kinetic energy of the moving particles gets transferred to the free electrons on the surface of the metal body. The phenomenon causes electron emission from the surface of the metal body. The Process of electron emission with the help of bombardment of the high-speed electron or other similar particles on a metal surface is known as Secondary Electron Emission.

These free electron move freely inside the metallic system. They move from atom to atom in a random manner but none of them comes out from the metal body at normal condition because of the surface potential barrier. Actually, the electrons well inside the metallic crystal get attracted from all sides due to the presence of positive nuclei surround it.

But when a free electron at the surface of the metal body gets sufficient kinetic energy, it may overcome the potential barrier (surface barrier ) and gets emitted in front of the body or emitter.

Here we have tried to draw a conceptual pictorial view of secondary electron emission. 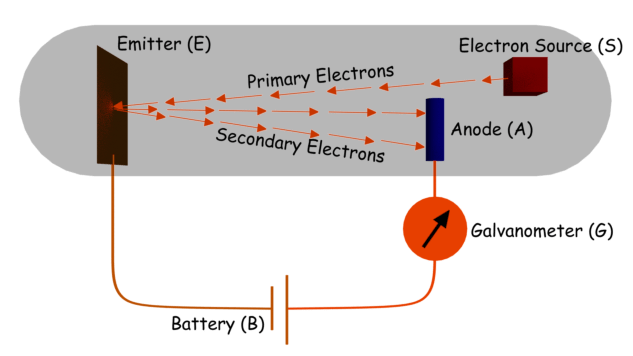 Here S is the source of primary electrons, E is the emitter or cathode, A is the collector electrode or anode. A and E are connected across a battery (B) to make the A of positive potential with respect to E. In the external circuit between A and E, we connect one sensitive Galvanometer (G) to measure the emission current. Here when the primary electrons from source S strike on the surface of cathode E, secondary electrons get emitted and attracted towards positive collector electrode or anode A.