What is the Schrodinger Equation

Unfortunately, it is only stated as a postulate in both cases and never derived in any meaningful way. This is quite dissatisfying as nearly everything else taught in undergraduate quantum physics is built upon this foundation. In this article, we will derive the equation from scratch and I’ll do my best to show every step taken.

Interestingly enough, the arguments we will make are the same as those taken by Schrödinger himself so you can see the lines of thinking a giant was making in his time. As a reminder, here is the time-dependent Schrödinger equation in 3-dimensions (for a non-relativistic particle) in all of its beauty:

Everyone likes to bag out classical physics – but it served us pretty well for quite a while (think Newtonian mechanics, Maxwell’s equations, and special relativity).

But why? To put it simply, in classical physics there exist two entities, particles waves. The features of both of these entities can be described as follows:

This brings us to the surprising results found in our Photoelectric Emission article. We found that the electron shows both of these properties. This was in complete contradiction with the known understanding of the time as the two entities were considered mutually exclusive.

Insane right? About this time, some really influential figures in physics started realizing that there was a gap in knowledge, and a large breakthrough came about when Louis de Broglie associated a momentum (for a particle) to a wavelength (for waves) given by

Also, from Photoelectric Emission we know that there energy absorption and emission of photons (still unsure whether particle or wave) have energy given by:

. We are now at the exact same stage Schrödinger was before deriving his famous equation. But where do we begin? Well, we know that the electrons and photons are showing wave-like and particle-like behavior. There wouldn’t be anything wrong with starting with a universal equation that all waves should obey and then introducing particle physics on top to see if there is a result.

How to derive the Wave Equation

obeys the wave equation. Remember, the electron displays wave-like behavior and has an electromagnetic charge. Therefore, for now, let us just look at electromagnetic fields. In this scenario, Maxwell’s equations apply and here they are in all of their glory: 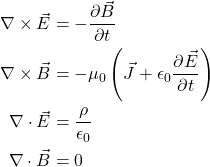 is the speed of light in a vacuum,

is the electric field and

is the magnetic field. The first equation above is the basis of electric generators, inductors, and transformers and is the embodiment of Faraday’s Law.

Also, one of the implications from

is that no magnetic monopoles exist. Understanding the derivation of these equations and the physical meaning behind them makes for a well-rounded engineer. Now, let us derive the equation that any electromagnetic wave must obey by applying a curl to Equation 4:

Now we can leverage a very familiary (and easily proven) vector identity:

is some placeholder vector. Applying to our little equation now:

How to Derive the Schrödinger Equation

This is, in reality, a second-order partial differential equation and is satisfied with plane wave solutions:

Where we know from normal wave mechanics that

. Now, let us make use of the work from Einstein and Compton and substitute in the fact that the energy of a photon is given by

. We can further massage our plane wave solution to:

! So let’s expand our understanding and apply the total relativistic energy for a particle with mass (like the electron for example) and change the name of our equation to

which describes particles and waves. We can now backsolve for an operator to get the equation above, and it’s given by:

Solving for Particles with Mass in the Wave Equation

for a particle with momentum and mass. Let’s just rearrange the formula slightly so we can use some approximations. 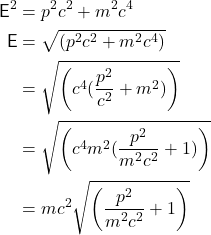 because if we take a Taylor Series expansion of this equation we get:

is small, the only part that remains in the Taylor expansion is the

term. In our energy formula,

. We can take advantage of the fact that

for anything that isn’t traveling at the speed of light (please find me if you do find anything that doesn’t satisfy this)! So this term actually reduces to:

Is the normal kinetic energy we see from high school physics. Now back to the wave function from before, let’s now input in this new information and see what we end up with:

(just based on the speed of light again) will be significantly more oscillatory to that of the second term and doesn’t necessarily describe the particle-wave entity we are after. So to solidify this difference, let’s now establish that:

Where we have now defined:

Let’s now take the first and second partial derivatives of

and see what we end up with. The first:

term carrying the order of magnitude, and therefore by approximation, the actual second derivative is given by:

The sneaky reason we took these two partial derivatives was so that we could impute them into this equation describing the wave function earlier:

But before we can do that, let’s rearrange this formula and we’ll end up with an equation called the Klein-Gordon equation:

Now, let’s simplify the Klein-Gordon equation (going back down to 1-D and applying our new energy formula) and we’ll arrive at the long-awaited Schrödinger Equation:

Let’s put in our new wave function given by

where we know what the first and second derivatives with respect to time look like:

Where the argument can be made by noting the similarity of the classical Hamiltonian that the term on the right-hand side of the equation describes the total energy of the wave function.

In our derivation, we assumed that

is 0 and that only the kinetic energy was taken into account. We know that the potential is purely additive with respect to its spatial variations and therefore, the full Schrödinger Equation in three dimensions with potential is given by:

That’s it! There we have it, this article has derived the full Schrodinger equation for a non-relativistic particle in three dimensions. If you’ve liked this post and would like to see more like this, please email us to let us know.

Abdul graduated the University of Western Australia with a Bachelor of Science in Physics, and a Masters degree in Electrical Engineering with a specialization in using statistical methods for machine learning. Abdul enjoys solving difficult problems with real-world impact.