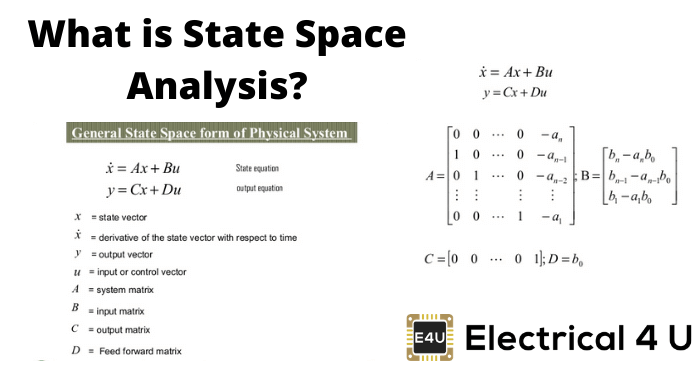 Let us derive state space equations for the system which is linear and time invariant.
Let us consider multiple inputs and multiple outputs system which has r inputs and m outputs.
Where, r = u1, u2, u3 ……….. ur.
And m = y1, y2 ……….. ym.
Now we are taking n state variables to describe the given system hence n = x1, x2, ……….. xn.
Also we define input and output vectors as,
Transpose of input vectors,

Where, T is transpose of the matrix.

Where, T is transpose of the matrix.
These variables are related by a set of equations which are written below and are known as state space equations

In all the above decomposition methods we first convert the given transfer function into the differential equations which is also called the dynamic equations. After converting into differential equations we will take inverse Laplace transform of the above equation then corresponding to the type of decomposition we can create model. We can represent any type of transfer function in state model. We have various types of model like electrical model, mechanical model etc.

We can write the equation as

Where, I is an identity matrix.
Now substituting the value of X(s) in the equation Y(s) and putting D = 0 (means is a null matrix) we have

Inverse of matrix can substitute by adj of matrix divided by the determinant of the matrix, now on rewriting the expression we have of

|sI-A| is also known as characteristic equation when equated to zero.

We are here interested in deriving the expressions for the state transition matrix and zero state response. Again taking the state equations that we have derived above and taking their Laplace transformation we have,

Now on rewriting the above equation we have