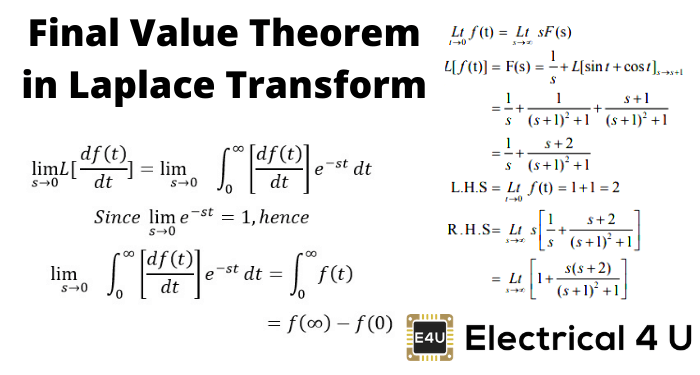 In the solution of Networks, Transient, and Systems sometimes we may not be interested in finding out the entire function of time f(t) from it’s Laplace Transform F(s), which is available for the solution. It is very interesting to find that we can find the first value or last value of f(t) or it’s derivatives without having to find out the entire function f(t). We will be interested in finding out final values and it’s derivatives in this article.

If f(t) and f'(t) both are Laplace Transformable and sF(s) has no pole in jw axis and in the R.H.P. (Right half Plane) then,

Note
Here the limit 0– is taken to take care of the impulses present at t = 0
Now we take limit as s → 0. Then e-st → 1 and the whole equation looks like

Note
See here Inverse Laplace Transform is difficult in this case. Still we can find the Final Value through the Theorem.

Answer
Note
In Example 1 and 2 we have checked the conditions too but it satisfies them all. So we refrain ourselves of showing explicitly. But here the sF(s) has a pole on the R.H.P as the denominator have a positive root.
So, here we can’t apply Final Value Theorem.

Answer
Note
In this example sF(s) has poles on jw axis. +2i and -2i specifically.
So, here we can’t apply Final Value Theorem as well.