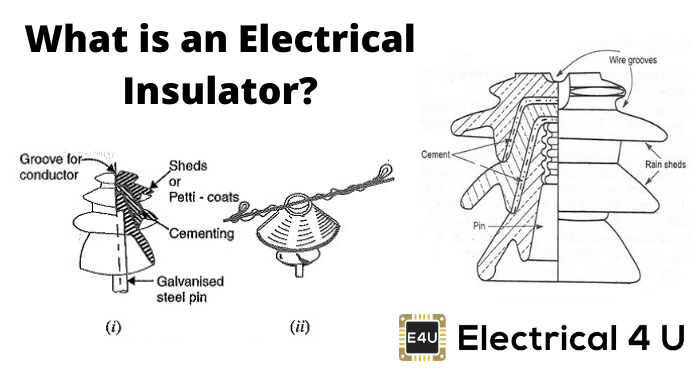 What is an Electrical Insulator?

The main cause of failure of the overhead line insulator is flashover, which occurs between line and earth during abnormal overvoltage in the system. During this flashover, the huge heat produced by arcing causes puncher in the insulator body. Viewing this phenomenon the materials used for electrical insulator has to possess some specific properties.

The materials generally used for the insulating purpose is called insulating material. For successful utilization, this material should have some specific properties as listed below-

The surface of the insulator should be glazed enough so that water should not be traced on it. Porcelain also should be free from porosity since porosity is the main cause of deterioration of its dielectric property. It must also be free from any impurity and air bubble inside the material which may affect the insulator properties.

Nowadays glass insulators have become popular in transmission and distribution systems. Annealed tough glass is used for the insulating purpose. Glass insulator has numbers of advantages over conventional porcelain insulator

In addition to this, some other disadvantages might be experienced. Let us give a practical example where many difficulties are faced in maintaining a distribution network in Victoria Australia due to polymeric insulators.

Another disadvantage is that they have had post type polymeric insulators melt and bend in bush fire areas. They have a concrete pole and a steel cross arm that survives a bush fire, however, the polymers in some cases fail. This would not be the case with glass or porcelain insulators.

They have also had polymeric insulators fail in areas close to the ocean coastline where there are high salt levels in the air.

There are mainly three types of insulator likewise

In addition to that, there are other two types of electrical insulators available mainly for low voltage applications, i.e. stay insulator and shackle insulator. Read more about the various types of insulators used in transmission lines.